Good morning!  It’s employment week; we are expecting a very weak report for April, with the unemployment rate in the 16% area.  Equity futures are lower.  We update the COVID-19 news.    Here are the details: 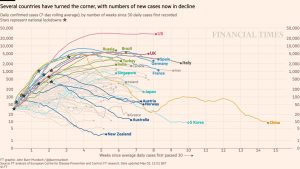 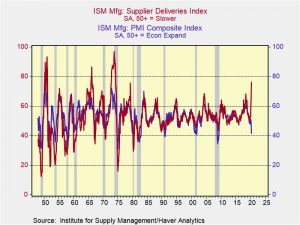 Note that it is unprecedented to see a supplier delivery reading above 70 with an ISM less than 60.  In this chart, we adjust the ISM by excluding supplier delivery.  This leads to a reading of 33, which is more in line with a deep downturn in the economy. 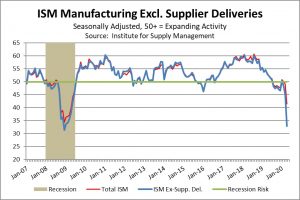 Turkey:  Sensing that President Erdogan is in trouble, the U.S. is increasing sanctions threats to forestall the activation of Russia’s S-400 missile defense system.  The Fed has widened swap lines to foreign central banks and created a Treasury repo market for central banks that are not given swap lines so these excluded central banks can access dollars without having to sell their bonds in reserves.  It appears that Ankara, facing a dollar supply crunch, will not get help from either source.  The Fed won’t give a swap line to such a dodgy borrower and Turkey doesn’t have enough reserves to repo.

Iran:  Iran’s new parliament is chock-full of hardliners and the election authorities restricted more liberal candidates.  However, just because there is a large majority of a certain political leaning doesn’t mean factions can be avoided.  There is an apparent battle for who will replace Ali Larijani for speaker of the parliament.

North Korea:  Well, to paraphrase the early Weekend Updates, Kim Jong Un is still not dead.  He was seen at a fertilizer factory over the weekend.  We do note there was an exchange of gunfire on the DMZ; no casualties were reported.

Venezuela:  Although details remain scant, there was apparently some sort of mercenary incursion into Venezuela last month.  There is no evidence that the U.S. government was directly involved in the action, but it is possible the U.S. was aware of the event.  Apparently, it went badly.

Argentina:  Buenos Aries is almost certainly going to default (again!) and require some sort of bailout.  However, the economic minister of the country, Martin Guzman, suggests in an FT op-ed that much of the emerging world will require similar support.  He seems to be suggesting we may see a broad debtors’ strike which would roil the global financial system.  In related news, growing financial stress is leading to trade tensions in South America and may threaten the Mercosur, the free-trade zone on that continent.

Germany:  The Social Democrats are arguing that Germany would be better off without U.S. nuclear weapons on its soil.  The presence of these warheads has been a sore point for the German left for decades.  However, maintaining the alliance has always led Germany to allow the U.S. to deploy these weapons despite the misgivings.  As the alliances fray, we may see these nukes go.  If they do, Germany will need to dramatically boost its conventional defenses or develop nukes of its own in the face of the potential threat from Russia.  Or, Germany could take the route favored by the SDP for ages, which is to improve relations with Moscow.  As long as Chancellor Merkel is in power, the nukes will likely stay.  But, if the SDP can break free from the current coalition, and perhaps join the Greens, this issue may return.

U.K./U.S. trade:  The two nations will launch talks for a free-trade agreement tomorrow.  If Brexit comes at the end of the year, it is clear Westminster wants to have a deal with the U.S. prepared.