Here is an updated crude oil price chart.  After dipping below the $37.00/$42.00 range, prices have returned to that band.  A key reason is that OPEC+ is considering additional production restrictions.

Commercial crude oil inventories fell 8.0 mb when a 2.0 mb build was expected.  The SPR declined 0.2 mb; since peaking at 656.1 mb in July, the SPR has drawn 16.7 mb.  Given levels in April, we expect that another 5.7 mb will be withdrawn as this oil was placed in the SPR for temporary storage.  Taking the SPR into account, storage fell 8.2 mb.  The data was affected by tropical activity again this week as Hurricane Zeta disrupted oil flows.

In the details, U.S. crude oil production fell 0.6 mbpd to 10.5 mbpd.  Exports fell 1.2 mbpd, while imports declined 0.6 mbpd.  Refining activity rose 0.7%.  Tropical activity continues, with Tropical Storm Eta expected to pass over Cuba this weekend.  Although we expect the oil regions of the GoM to be unaffected, it will likely disrupt shipping, thus affecting next week’s import and export data.  We do expect tropical activity to wind down as we approach Thanksgiving.

The above chart shows the annual seasonal pattern for crude oil inventories.  This week’s data showed a large decline in crude oil stockpiles, which is contraseasonal.  Inventories are approaching their second seasonal peak.  Thus, after next week, we would expect a steady slide in oil inventories.

Gasoline inventories are approaching their autumn seasonal trough.  Next week, the low is usually made and then stockpiles rise steadily into Valentine’s Day.  This rise can be a bearish factor for crude oil prices as it has the potential to reduce refining margins.

As the energy world continues to think about reducing carbon output, the “once and future fuel,” hydrogen, is again making headlines.  We first looked at hydrogen back in the 1990s when interest in fuel cells rose.  There are some really attractive elements to hydrogen as a fuel.  Fuel cells are nearly pollution-free.  Hydrogen is a really light fuel and very efficient.  But, creating hydrogen is an issue.  There are generally two sources of hydrogen—water or a hydrocarbon (natural gas or coal).  Separating the oxygen from the hydrogen from water takes a lot of energy, so if the energy is not “green,” the environmental improvement is much less.  We would expect more interest on fuel cells and hydrogen in the coming years as countries try to figure out how to achieve a reduction in carbon emissions without crippling economic growth.

Last week, we discussed the rise in natural gas prices, which has allowed natural gas-focused firms to outperform oil-concentrated ones.  One of the factors helping gas is exports.  LNG exports to Europe have been improving. 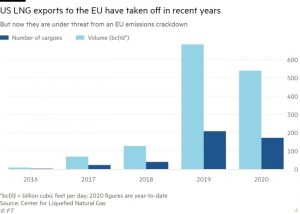 However, these flows are now facing increased scrutiny by European regulators.  For years, natural gas was seen as the “good fuel”; its carbon footprint is less than coal or oil.  But, methane leaks from natural gas wells are common and methane is a potent greenhouse gas.  Accordingly, EU regulators are closely examining the impact from LNG and thus exports are at risk.  France has actually moved to ban U.S. LNG due to the lack of well head methane control.  The U.S. is arguing against France’s decision and we await any trade retaliation.  If the pressure continues, we would expect U.S. natural gas firms to take additional steps to control well leakages to win back EU business.

Japan announced it intends to be carbon neutral by 2050.  The narrative is that Japan will achieve this goal through solar and wind.  We suspect it will have to take another look at nuclear if this goal is to be achieved.  Japan has been replacing nuclear capacity with coal due to the Fukushima disaster but maintaining that trend and meeting this carbon goal are incompatible.

In our WEU report from October 16, we noted that energy stocks are underperforming not only overall equities but even crude oil prices.  Part of the reason for this divergence has been that energy scores low on ESG—Environment, Social, and Governance—investing.  Although we take a rather dim view of ESG,[1] there is no doubt the investing style has become quite popular.  It is very possible that the underperformance of energy stocks is tied to the onset of ESG investing.  In response, the Energy sector is looking to improve its ESG profile.  For example, Baker-Hughes (BKR, USD 15.32) announced it will be Compact Carbon Capture, a privately held firm engaged in, well, what its name says.  Although carbon capture technology is relatively new, it could be critical to maintaining climate stability.  The fact that energy companies are investing in the technology suggests they are taking account of climate change.

Another problem?  Although shale oil production has clearly led to a rapid rise in U.S. oil production, it has done so with little benefit to investors.  The industry has tended to consume capital and has mostly survived in a low interest rate environment.  The remaining firms are now seeking to improve their position with Wall Street, mostly through mergers.  It remains to be seen if the industry can return to favor among investors.

[1] Definitions are loose; there is an element of virtue signaling in the process and appears to be more about marketing than real impact.