Good morning, all.  Equity markets are marking time this morning, but the market tone isn’t very good.  A general market comment leads our coverage this morning.  The virus update comes next.  China news follows.  We close with economic, policy, and Brexit news, with a bonus chart that caught our attention.  The Fed has released its Financial Accounts of the U.S., known by market veterans as the Flow of Funds.  There is a great deal of interesting data that comes from this report, and we will highlight different graphs over the next few days.  And, being Thursday, the Weekly Energy Update is available.  Let’s get to the details:

About this market:  After a remarkable recovery from the lows seen in March, several markets are showing signs of weakness.  Equities have clearly come off their highs and are struggling.  The star of the past several months, precious metals, is suddenly seeing weakness.  And Treasuries aren’t rallying very much.  There are a number of factors behind this broad weakness.  Here is the short list:

COVID-19:  The number of reported cases is 31,920,652 with 977,311 deaths and 22,002,729 recoveries.  In the U.S., there are 6,935,414 confirmed cases with 201,920 deaths and 2,670,256 recoveries.  For illustration purposes, the FT has created an interactive chart that allows one to compare cases across nations using similar scaling metrics.  The FT has also issued an economic tracker that looks across countries with high frequency data on various factors.  And the weekly Axios state chart is out; infections are rising, mostly in the Rockies. 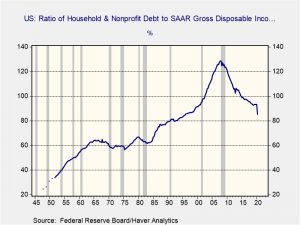 This chart shows household debt compared to after tax income.  We have seen a downtrend in debt relative to income since 2007, but in Q2 it fell sharply.  This is because of the massive level of transfers due to the CARES Act.  Although we do expect households to eventually spend down their savings, what this does show is that it is possible to improve household balance sheets by effectively moving the debt to the public balance sheet.  Our belief is that if we saw this ratio fall below 80%, the chance of a stronger, more durable recovery is likely.

[1] The election of 1876 is a notable exception.  We will have more to say on that in an upcoming AAW and WGR.