Crude oil inventories fell a bit less than expected.  Commercial stockpiles declined 1.6 mb compared to forecasts of a 2.8 mb decline.  The SPR declined 0.8 mb; since peaking at 656.1 mb in July, the SPR has drawn 11.0 mb.  Given levels in April, we expect that another 10.1 mb will be withdrawn as this oil was placed in the SPR for temporary storage.  Taking the SPR into account, storage fell 2.4 mb.

The above chart shows the annual seasonal pattern for crude oil inventories.  This week’s data showed a decline in crude oil stockpiles, which is contra-seasonal.  Inventories tend to make their second seasonal peak in the coming weeks.  Tropical activity has been elevated this year and has distorted the data; we won’t get a really clear picture of oil flows for a few weeks. 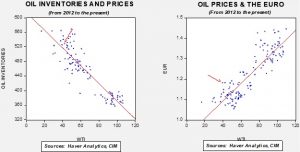 Based on our oil inventory/price model, fair value is $42.25; using the euro/price model, fair value is $63.79.  The combined model, a broader analysis of the oil price, generates a fair value of $52.57.  The wide divergence continues between the EUR and oil inventory models.  As the trend in the dollar rolls over, it is bullish for crude oil.  Any supportive news on reducing the inventory overhang could be very bullish for crude oil.

Gasoline consumption fell a bit this week.  Seasonally, this is normal.  Driving tends to slow as vacation season ends.  As the chart shows, consumption declines slowly into mid-January.  This year may be different; if a vaccine is developed that increases commuting then we could see driving levels rise, but without that result we should expect overall demand to fall through Q4. 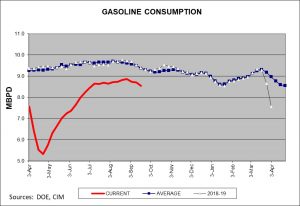 As we noted last week, the most potent bearish factor for oil prices has been weak demand.  The response to the pandemic has led to a sharp drop in consumption around the world.  The uneven path of the virus spread has made demand forecasting especially difficult.  In general, as the virus situation improves, we should see demand improve.  However, the recovery has been slow, especially since emerging markets seem to be the source of much of the slide in consumption.  Emerging market economies tend to use more oil per unit of GDP because their economies lean toward goods production.  Thus, economic weakness in this sector of the world economy tends to have a disproportionate impact on oil demand.  In the long run, rising concern about climate issues is a bearish demand factor for oil.  The Business Roundtable’s recent call for carbon pricing, a harbinger for a carbon tax, shows that business leaders are moving on this issue even if the political leadership remains divided.  The industry is starting to grapple with the idea of peak oil demand; managing contraction is very difficult.  Although the timing of the drop is difficult to discern, the likelihood that demand will fall over time is rising.  One of the worries is that if oil reserve owners conclude they are holding a wasting asset, there will be a drive to “dump” their asset at any price.  One technology that could save the oil industry is carbon capture.  Large oil companies are funding research but, so far, no commercially viable technology has emerged.  Given the level of CO2 in the atmosphere already, carbon capture may be necessary even if we reduce oil consumption.

At this week’s U.N. video gathering on the 75th anniversary of the founding of the body, General Secretary Xi said his country would achieve “carbon neutrality” by 2060.  National promises on such issues are easy to make but hard to achieve.  And, that promise will certainly not be fulfilled in Xi’s lifetime.  Nevertheless, if the CPC is serious on this issue, it is bad for the oil demand outlook.  Interestingly enough, we doubt this is achievable without a serious expansion of nuclear energy.  Nuclear energy has become nearly impossible in the developed world, but it very well could expand in authoritarian China.

This isn’t to say that supply hasn’t played a role in keeping prices depressed; Saudi Arabia is calling out OPEC members who are exceeding quota.  Unfortunately, short of triggering another price collapse, there is little the kingdom can do to force compliance.

Iran has been in the news as the U.S. is attempting to “snap back” sanctions of the Iran nuclear deal.  These sanctions specifically prohibit the sale of military equipment to Iran.  The U.S. is mostly making this response by itself, although the fear of running afoul of U.S. financial sanctions will give the American action more effect than would be seen from other nations.  Iran, in response to U.S. actions and the reluctance of other nations to continue trade with Tehran out of fear of American reprisal, has responded by increasing its inventory of enriched uranium.  Despite the rising tensions, it appears that Iran is studiously avoiding giving the U.S. a cause to engage militarily.  It is especially reducing activities in Iraq.  Most likely, this decision is designed to avoid giving President Trump a war as the U.S. heads into elections in November.

In Libya, which is in the midst of a civil war, it appears the current oil blockade is going to be lifted.  Although this action could increase global oil supplies, in reality, the situation in Libya is so unstable that any flows will likely be intermittent.

Meanwhile, financing conditions in the U.S. oil patch remain perilous.  Bankruptcies are rising and companies continue to outspend their revenue, a condition that can only continue with a steady source of funding.  One area that has seen a reversal for fortune is the Permian.  The lack of pipeline capacity pre-pandemic was a constant problem, leading to wide price differentials as producers faced bottlenecks in getting their oil to refiners.  Now they have the opposite problem; the industry responded by building takeaway capacity, only to find now there is more pipeline capacity than production.

The Nord Stream 2 project that will take natural gas directly to Germany has been a point of contention between Washington and Berlin for years.  The pipeline is very close to completion and elements within Germany and Russia want to see it finished.  The pipeline purposely avoids Ukraine; in the past, when Russia and Ukraine have had issues, Russia would often close or curtail natural gas supplies which would reduce gas to much of Europe.  This new pipeline is designed to avoid this problem.  The U.S. isn’t fond of Nord Stream 2 because it gives Russia leverage over Germany, so American administrations have consistently tried to get Germany to abandon the project.  The recent poisoning of Alexei Navalny increased calls for Germany to scotch the pipeline.  Instead, Berlin is offering to support the construction of two new LNG terminals in return for allowing the pipeline to be completed.  The idea is that these facilities would allow the U.S. to also supply Germany with natural gas.  Therefore, despite everything, it does appear the pipeline will be finished.