Our Comment today opens with an update on the Russia-Ukraine war, where Russia’s advances remain stalled, and President Putin gave a Victory Day speech that was unexpectedly restrained.  We next review a range of international and U.S. developments with the potential to affect the financial markets.  Finally, we wrap up with the latest news on the coronavirus pandemic, where new data underscores the extent to which China’s “zero-COVID” policies are weighing on economic activity.  The data also emphasizes the threat to world economic growth, which, along with rising bond yields, has contributed to the downdraft in global stock markets so far today.

Russia-Ukraine:  The military situation in Ukraine remained relatively static over the weekend, with Russian forces failing to make any significant advances.  Russian forces appear to be massing in Belgorod, Russia, to reinforce Russian efforts in the northern Ukrainian city of Kharkiv and prevent the ongoing Ukrainian counteroffensive from pushing closer to the Ukraine-Russia border.  Russian forces near the northeastern Ukrainian city of Izyum focused on regrouping, replenishing, and reconnoitering Ukrainian positions in order to continue advances to the southwest and southeast of the city.  Meanwhile, Russian forces continued their ground attacks to drive to the borders of Donetsk and Luhansk Oblasts but did not make any territorial gains.  Finally, in Mariupol, Russian troops continued to assault the Azovstal Steel Plant and advanced efforts to integrate the city economically into the wider Russian economy.  In a rare instance of Ukrainian dissent, after the last civilians were evacuated from the Azovstal plant over the weekend, the commander of Ukraine’s Azov regiment defending the facility accused Kyiv of providing insufficient support. 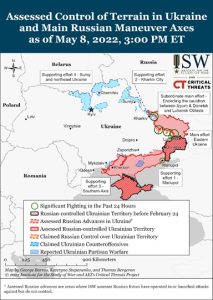 China-Taiwan:  In detailed comments on China’s response to Russia’s invasion of Ukraine, CIA Director Burns said President Xi has been “unsettled” by the conflict.  Burns said that Xi, who prizes predictability, has been shocked to learn of the “reputational damage that can come to China by the association with the brutishness of Russia’s aggression [and] the economic uncertainty that’s been produced by the war.”

China-Hong Kong:  John Lee Ka-chiu, the sole candidate in Hong Kong’s leadership election, has been confirmed as the city’s next chief executive with 99.4% of the vote from the city’s electoral body.  In his acceptance speech, Lee vowed that the rule of law and stability would be among his key priorities in running Hong Kong.  Lee is considered a hardliner in imposing Beijing’s policies on Hong Kong.

Chinese Technology Industry:  As major Chinese technology firms continue to face a tough regulatory crackdown by the government and U.S. investment restrictions, they are trying to boost their stock prices through buybacks and dividend hikes.  All the same, we still see heightened regulatory risks as a major issue for investing in Chinese tech companies.

United Kingdom:  In Northern Ireland, the latest voting tallies show the Irish Republican Party Sinn Féin is on track to become the biggest party in the province’s legislature.  The rival Democratic Unionists (DUP), who have led every power-sharing government in Belfast since 2007, suffered significant losses that will resign it to a painful second-place finish.

U.S. Electricity Supply:  From California to Texas to Indiana, electric-grid operators warn that power-generating capacity is struggling to keep up with demands, a gap that could lead to rolling blackouts during heat waves or other peak periods as soon as this year.

U.S. Port Operations:  West Coast dockworkers and cargo-handling firms will begin contract negotiations this week that carry high stakes for an American economy wracked by supply chain disruptions.  The labor talks cover about 22,400 workers at 29 ports, including the sizable Southern California facilities that make up the country’s busiest gateway for imported goods.  If the talks fail and a strike ensues, the added supply disruptions would likely further boost inflation, slow economic growth, and weigh on corporate profits and stock prices.

COVID-19:  Official data show confirmed cases have risen to 517,364,841 worldwide, with 6,251,376 deaths.  The countries currently reporting the highest rates of new infections include Germany, South Korea, France, and Italy.  (For an interactive chart that allows you to compare cases and deaths among countries, scaled by population, click here.)  In the U.S., confirmed cases rose to 81,863,771, with 997,528 deaths.  In data on the U.S. vaccination program, the number of people considered fully vaccinated now totals 220,138,061, equal to 66.3% of the total population.