Our Comment today opens with an update on the Russia-Ukraine war, where both sides continue to face resource constraints and are struggling to make significant new territory gains.  We next review other international and U.S. developments with the potential to affect the financial markets today, including an emergency meeting called by the European Central Bank to address a sell-off in the government bonds of Italy and other economically weak members of the Eurozone.  We close with the latest news on the coronavirus pandemic.

Russia-Ukraine:  The Russian and Ukrainian militaries remain essentially deadlocked in their struggle to control eastern and southeastern Ukraine, with each side finding it difficult to generate the force needed to make significant gains.  In a desperate attempt to increase manpower, the Russian military is reportedly preparing to raise the age limit for military service from 40 to 49 and drop an existing requirement for past military service to assist in the tank and motorized infantry units.  The Russians are also reportedly accelerating their efforts to integrate occupied Ukrainian territory into Russia proper, using methods as diverse as introducing the ruble as legal tender and changing the international calling prefix for cell phones to the Russian code instead of the Ukrainian one.

Eurozone Monetary Policy:  The ECB said it will hold an emergency meeting today to discuss a recent sell-off in the bonds of economically weaker countries in the bloc’s south.  In a process referred to as “fragmentation,” investors had dumped those bonds in recent days after the ECB said it would conduct a series of interest-rate hikes but didn’t unveil a new tool to shield highly indebted economies in southern Europe from the effect of the rate rises. 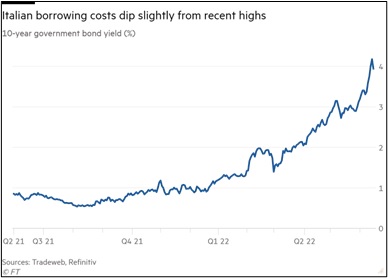 European Union Tax Policy:  Poland is reportedly ready to accept an EU plan to adopt the OECD’s global deal on minimum corporate taxes agreed to last year.  If Poland drops its veto and no other members come up with last-minute objections, the EU will implement a minimum effective tax rate of 15% on corporations.

European Union-United Kingdom:  The European Commission announced it would resume a previously paused legal action against the U.K. for failing to implement full border checks in Northern Ireland.  The move is in retaliation for the British government’s announcement yesterday of a proposed law that would allow it to abrogate the Northern Ireland protocol contained in the post-Brexit EU-U.K. trade deal.

Hong Kong:  Monetary authorities in Hong Kong said they sold more foreign-exchange reserves to maintain the Hong Kong dollar’s longstanding peg to the greenback, taking its total outlay this year to $5.48 billion.  The move comes as the continuing surge in the greenback threatened to push Hong Kong’s dollar out of its permitted exchange rate band of 7.75 to 7.85 per U.S. dollar.

Chile:  New reporting suggests that a splinter group of Mapuche indigenous people has been increasing its attacks on logging companies, other businesses, and police in central Chile.  The attacks are putting increased pressure on the country’s new leftist president, Gabriel Boric, to reimpose order.  With Chileans also set to vote on a new, leftist constitution later this year, any failure by Boric to get control over the situation would further undermine Chile’s attractiveness to investors.

U.S. Monetary Policy:  Today, Federal Reserve officials wrap up their latest policy meeting, with surging inflation readings leading some observers to think they could hike interest rates by a very aggressive 75 basis point when they release their decision at 2:00 pm ET.  We have even heard chatter about a possible 100-basis-point hike.  The policymakers will also release their latest “dot plot” projections for the economy and the path of future interest rates.

U.S. Gasoline Market:  Faced with political doom because of soaring inflation and gasoline prices, President Biden has sent a letter to several major U.S. refiners, warning them against price gouging and asking them to take immediate action to increase the supply of gasoline, diesel, and other refined products.  He said his administration was prepared to use its emergency authorities to increase capacity in the near term, if necessary.  The letter signals an increased risk that politicians may try to intervene in the market to bring prices down, perhaps even including a windfall profits tax.

U.S. Natural Gas Market:  U.S. natural gas prices fell some 16% yesterday after an LNG shipping facility in Texas said a fire last week would knock it offline until late this year, greatly reducing export capacity but boosting the supply of gas in the U.S.  Gas for delivery in July ended at just $7.189 per million British thermal units. Futures prices for deliveries through February shed at least 10% on the day, suggesting markedly diminished fears about shortages this coming winter.

U.S. Cryptocurrency Market:  Bitcoin (BTC-USD, 22,166.98) fell another 5.4% yesterday, marking a decline of about 68% from its all-time high in November last year of $67,802.  So far this morning, it is down another 8% to approximately $20,100, and other digital currencies are even weaker.  The continuing decline in Bitcoin and other digital assets largely reflects the impact of the Fed’s increasingly aggressive monetary tightening.

COVID-19:  Official data show confirmed cases have risen to  536,720,870 worldwide, with 6,312,601 deaths.  The countries currently reporting the highest rates of new infections include the U.S., Taiwan, Germany, and Australia.  (For an interactive chart that allows you to compare cases and deaths among countries, scaled by population, click here.)  In the U.S., confirmed cases have risen to 85,762,625, with 1,011,925 deaths.  In data on the U.S. vaccination program, the number of people considered fully vaccinated now totals 221,768,203, equal to 66.8% of the total population.