Happy St. Ignatius[1] Day!  It’s Friday and the “dog days” of August await.  Equity markets are mostly higher this morning after the major tech firms revealed impressive earnings.  This may be one of the rare times where such earnings are a problem given the firms’ recent testimony to Congress.  Policy news, or the lack thereof, leads today’s coverage.  China and COVID-19 are next.  The new Asset Allocation Weekly is posted below (and published as a separate report on our website) and the related podcast and chart book are also available.  Here are the details: 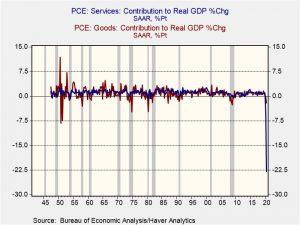 This chart highlights the problem of boosting growth.  Consumption dominates GDP and services dominate consumption.  Goods represent 33% of consumption and services 67%.  Services are dependent on contact; 16% of service consumption is restaurant and recreation.  Add health care, another service that usually requires contact, and the percentage rises to 40%.  Without a reliable way to control the spread of the virus, getting services back will be very difficult.  A vaccine with widespread adoption is the best path to this goal, so, as Chair Powell indicated, the economic recovery is dependent on the virus.

COVID-19:  The number of reported cases is 17,322,041 with 673,833 deaths and 10,156,580 recoveries.  In the U.S., there are 4,495,224 confirmed cases with 152,075 deaths and 1,414,155 recoveries.  For those who like to keep score at home, the Financial Times has created a nifty interactive chart that allows one to compare cases across nations using similar scaling metrics.  The FT has also issued an economic tracker that looks across countries with high frequency data on various factors.  The Rt data is showing some improvement.  Forty percent of the states have a reading under 1, which would indicate the virus spread should diminish.  On a local note, Missouri has the highest reading in the union, at 1.2.

[1] The founder of the Society of Jesus (Jesuits).

[2] This is why the advent of gig work is so interesting.  It allows firms more flexibility in their “inventory.”

[3] The economic theory is called the permanent income hypothesis.  It postulates that households spend based on their income and wealth history.  Thus, if incomes fall but the decline is seen as temporary, spending continues.  If the opposite occurs, wherein a windfall happens, spending doesn’t immediately adjust.

[5] “Science progresses one funeral at a time.” — Max Plank