We have several recent multimedia offerings.  First, we have a new chart book recapping the recent changes we made to our Asset Allocation portfolios.  As we noted last week, we’ve also posted a new Confluence of Ideas podcast.  Being Friday, we have a new Asset Allocation Weekly, chart book, and podcast.  The new Weekly Energy Update is now available; it was delayed a day due to the holiday earlier this week.  You can find all this research and more on our website.

U.S. equity futures are higher this morning as markets grapple with the steady rise in interest rates.  We begin the discussion with our view of rising debt levels.  From there, we cover policy and economics, with special focus on the minimum wage developments.  A roundup of international news follows, and we close with a pandemic update. 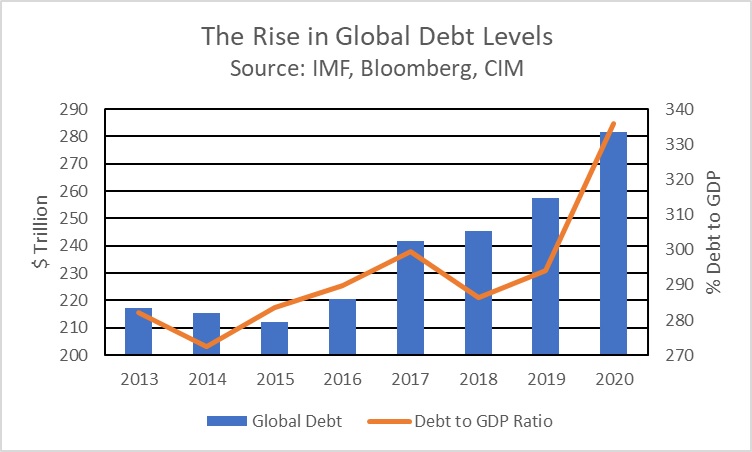 Following last year’s debt binge that saw households, companies, and governments raise over $24 trillion to offset the pandemic’s impact, worldwide debt levels have soared to unprecedented levels. This surge in global debt has sparked concerns of a possible financial crisis in the offing. Here are our thoughts about it:

This time may be different: The four deadliest words in economics are “this time is different,” as almost every time an economist has uttered the phrase, he was proven wrong.  Therefore, we hedge the statement with the word may. That being said, we are optimistic that the debt binge will not lead to an imminent financial crisis for the following reasons:

If we are wrong: The biggest risks to our prediction are:

COVID-19:  The number of reported cases is 110,146,931 with 2,435,733 fatalities.  In the U.S., there are 27,854,389 confirmed cases with 491,411 deaths.  For illustration purposes, the FT has created an interactive chart that allows one to compare cases across nations using similar scaling metrics.  The FT has also issued an economic tracker that looks across countries with high-frequency data on various factors.  The CDC reports that 73,377,450 doses of the vaccine have been distributed with 57,737,767 doses injected.  The number receiving a first dose is 41,021,049, while the number of second doses, which would grant the highest level of immunity, is 16,162,358.  The Axios map shows marked declines in infection rates.