Happy employment day Friday!  We cover the data below, but the quick read is that the report was a blowout—payrolls rose much more than forecast and the unemployment rate fell.  It is bullish for equities, bearish for gold and Treasuries.  In other news, strikes continue in France.  There is additional optimism on trade.  German industrial production is weak.  OPEC promises to cut output in the wake of the Saudi IPO.  Here are the details:

Looking for something to listen to this weekend?  Episode #4 of the Confluence of Ideas Podcast has been released.  It’s all about the Equality/Efficiency Cycle.  Enjoy!

Trade:  China announced it is waiving retaliatory tariffs on pork and soybean imports, a necessary procedural step to increasing purchases of these items.  Ag imports have been a keep demand of U.S. trade negotiators, so this official action is a favorable sign of progress.  Comments from China suggest that talks are still making progress.  However, there are warning signs that the Uighur bills making their way through Congress might put a halt to trade talks.  President Trump passed the Hong Kong bill, but it does appear that China is signaling that if the Uighur legislation is passed, trade progress will be at risk.  The Hong Kong and Uighur tensions do not seem to be easing; we are starting to see commentary that would lead to further tensions between the two countries which would harden positions.  Despite the aforementioned progress, Chinese firms are reportedly stockpiling computer chips.

Strikes:  Massive strikes shut down France yesterday and the walkout appears to be extending through today.  The labor action, as we noted yesterday, is tied to proposed pension reform, which is designed to raise the retirement age in a bid to shore up finances.  There has been no indication that Macron is softening his stance.  Meanwhile, Finland is facing widespread strikes after industrial unions and companies were unable to agree on new contracts. 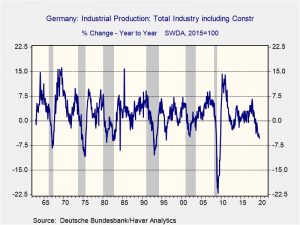 The chart shows the yearly change in the production index; we have put recession bars in place for German recessions.  The current decline of 5.3% would be consistent with recession.

OPEC and Saudi Aramco:  There was good news and bad news.  The good news is that OPEC apparently agreed to an additional 500 kbpd of production cuts.  However, the agreement only extends into the end of Q1, and there is a lack of clarity as to the allocation of the cuts.  So, the short-term nature of the agreement and skepticism over compliance is pressuring oil prices this morning.  Meanwhile, the Saudi Aramco IPO did hit the market yesterday, becoming the largest IPO in history.  We will be watching to see if, post IPO, Saudi Arabia remains committed to maintaining current prices.

Iran:  We have been noting in the past few days that tensions are rising in Iran.  The recent rise in gasoline prices have led to widespread unrest.  The U.S. is considering boosting its troop presence in the region.  A U.S. envoy in the region claimed that there may have been up to 1,000 casualties in the government’s crackdown.  Now Iran is facing pressure from friendly nations over its decision to increase uranium enrichment as France, Britain and Germany will engage a dispute mechanism over this issue.

Japan:  October household spending was down an unexpectedly sharp 5.1% year-over-year, marking the first annual decline in eleven months and the worst annual fall since March 2016.  Much of the decline came from a major typhoon at the time, but it also appears the October 1 hike in the value-added tax may be having more impact than anticipated (see our WGR on the hike here and here).  The jury is probably still out on that until we see the data for November and December.  Still, for the time being, the report is likely to be a negative for Japanese stocks.

Canada:  In a speech laying out his plans for his second term, Prime Minister Trudeau promised lower taxes and expanded international trade, including further support for pipelines to Canada’s west coast to open up new markets for the country’s petroleum production, in spite of his support for measures to battle climate change.  He also laid out a shift to the left on domestic issues like healthcare, where he vowed to add pharmacy benefits to the country’s universal care system.

China:  In a sign that the Chinese government is having trouble getting its hands around the country’s debt problems, a new report shows many listed private firms that have received government bailout funds have reneged on their required debt payments, even after local courts ordered them to pay up.

Indexing:  Germany’s Deutsche Börse has reportedly rolled out a product that allows financial firms to design their own indexes and then outsource their maintenance.  The product is designed to help firms avoid the licensing fees involved in benchmarking against the major indexes.  According to some industry analysts, the product will help hasten the move to “direct indexing,” in which firms hold a customized basket of stocks directly, perhaps relying on a customized index that merely incorporates the firm’s own buy/sell rules.  In other words, the move may help blur the line between passive and active investing.

Odds and ends:  Italy is making noise again about exiting the Eurozone.  If it does, it is not clear if the single currency would survive the blow.  Ukraine and Russia are in talks about the breakaway regions in Ukraine; a top presidential aid to Ukraine suggested that if talks fail, his nation may build a wall to isolate the Russian backed breakaway regions in his country.  A Chinese bank announced steps to limit U.S. dollar transfers in a bid to slow capital outflows.  Kim Jong un is back to riding his white horse, warning he is about out of patience with the U.S.  There has been a recent increase in tensions between the two Koreas, signaling a harsher tone out of Pyongyang.