Good morning as another month, that feels like a year, comes to a close.  Just a reminder—tomorrow is May Day, the international celebration of Labor Day.  Most European financial markets will be closed, although Denmark and the U.K. will remain open.  The ECB meets today; initial market reaction to the statement was negative as the moves taken appear modest.  Equity futures are mixed, and oil continues to recover; our Weekly Energy Update is available.  We update the COVID-19 news.  Here are the details: 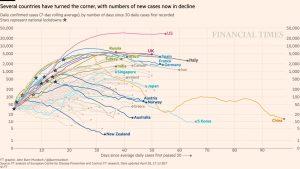 Here is another interesting graphic—it shows the spread of COVID-19 over time.  What is shown is that the only parts of the world that have not reported the virus are some islands in the Pacific.  According to rt.live, there are only seven states with R0 higher than one and six are in the Midwest.

Brexit:  Although the focus recently has been on COVID-19, Brexit negotiations have been held.  The conventional wisdom is that PM Johnson will ask for an extension.  However, what we have seen thus far suggests that the U.K. fully intends to leave at the end of the year and if that intention leads to a hard break with the EU, so be it.  Although there hasn’t been much attention paid to Brexit recently, a hard break would likely be taken as negative for U.K. financial assets.  A side note:  PM Johnson is a new father.