Good morning and happy Monday, the last one in April!  U.S. equity futures are mostly steady this morning as investors await a plethora of earnings reports this week.  Our coverage begins with the pandemic, and we are watching India’s caseloads rise.  International news follows, with the U.S. decision to label the 1915 Armenian situation a genocide.  An economic roundup follows (it’s all about chips), and we close with China news.

COVID-19:  The number of reported cases is 147,238,543 with 3,110,511 fatalities.  In the U.S., there are 32,077,477 confirmed cases with 572,200 deaths.  For illustration purposes, the FT has created an interactive chart that allows one to compare cases across nations using similar scaling metrics.  The FT has also issued an economic tracker that looks across countries with high-frequency data on various factors.  The CDC reports that 290,692,005 doses of the vaccine have been distributed with 228,661,408 doses injected.  The number receiving at least one dose is 139,978,480, while the number of second doses, which would grant the highest level of immunity, is 94,772,329.  The FT has a page on global vaccine distribution.

Economics and policy:  Inflation and financial regulation lead this morning. 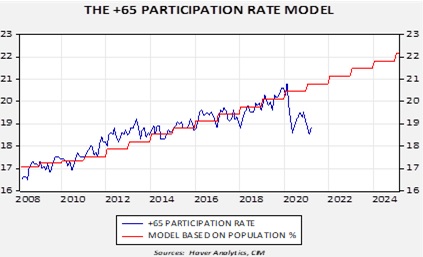 We doubt these workers are coming back.  If so, the pool of workers will be lower going forward, and this fact will tend to tip the balance of power toward labor.  Of course, globalization and technology will still tend to offset these factors, but only to some degree.  Over time, this factor will lead to (a) higher inflation or (b) lower profit margins.  Most likely, it will be a bit of both.

[1] A joke by Johnny Carson led to a run on toilet paper and a subsequent shortage.

[2] Anecdotally, we note that before the pandemic, grocery baggers at my local stores were about 50% workers over the age of 60 (at least they looked like it).  Those workers have completely disappeared, replaced with younger workers.