Good morning, and happy Monday!  Global equity markets are mixed this morning, with U.S. equity futures taking a breather.  Our coverage this morning starts with bitcoin, which had a rather wild weekend.  Russia news follows and includes several items.  China news is next, followed by an update on German politics.  There is an economic roundup, and we close with the pandemic update. 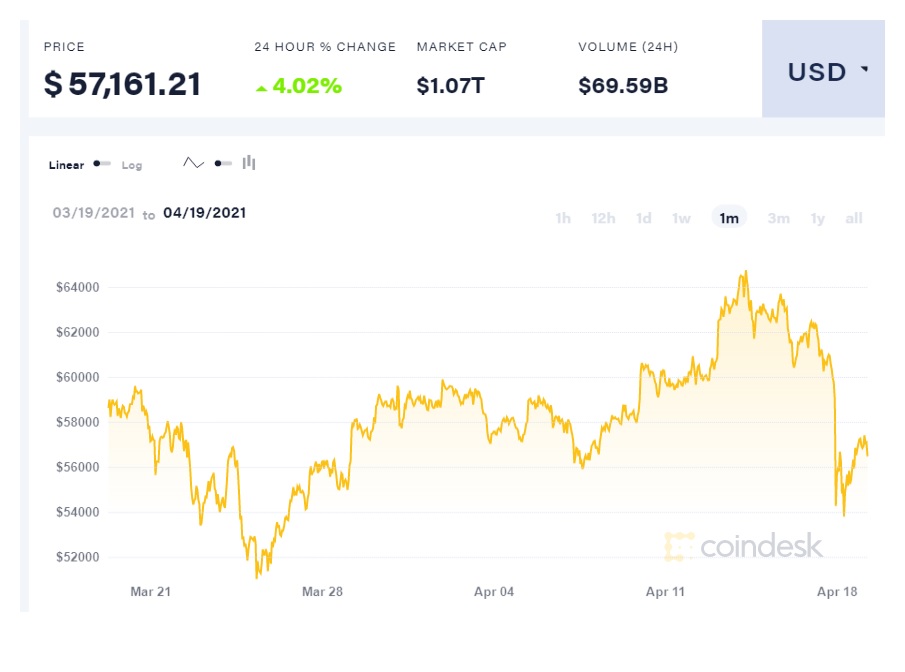 Although the plunge over the weekend isn’t all that unusual, the reasons behind the pullback are unclear.  There are reports that the Treasury is contemplating a crackdown on digital assets, which are often used for money laundering.  We note that Turkey’s central bank has banned cryptocurrency payments as well; one of the greatest dangers to cryptocurrencies could come from government regulation.  This decline could also be part of the post-market Coinbase (COIN, USD, 342.00) IPO.  As the chart above shows, prices had rallied into the IPO, and thus some of this decline could be profit taking.  Although China has made it more difficult to mine bitcoin because of the drain on electricity, the PBOC has taken a rather sanguine position on cryptocurrencies.  We doubt this will last; General Secretary Xi tends to take a dim view on things he can’t control.

We comment on market action this morning in part because bitcoin and other cryptocurrencies have siphoned off liquidity from the financial markets.  If prices reverse, that liquidity could look for a new home.

China:  U.S. and China agree to cooperate on climate issues, and Japan and the U.S. agree to counter Chinese coercion.

Germany:  Germany will hold national elections in the fall, and the CDU/CSU is struggling to agree on a leader in the midst of a slump in the polls.  Meanwhile, the Greens, who are seeing their poll numbers rise, have selected Annalena Baerbock as party chair.  If the party wins in the upcoming elections, she would become Chancellor.  The Greens are an environmental party, but over the years have become increasingly centrist.  Perhaps more important for the U.S., the Greens are much more strongly opposed to Russia and China compared to the CDU/CSU, who loath to harm business relations.  The conservatives are more closely aligned with the “metal banging” part of the economy.  The Greens are closer to the technology and services sectors.  It is notable that the Greens oppose the Nord Stream 2 project.

Economics and policy:  Tax negotiations continue, and the economy starts to emerge from the pandemic.

COVID-19:  The number of reported cases is 141,499,661 with 3,021,912 fatalities.  In the U.S., there are 31,670,706 confirmed cases with 567,217 deaths.  For illustration purposes, the FT has created an interactive chart that allows one to compare cases across nations using similar scaling metrics.  The FT has also issued an economic tracker that looks across countries with high-frequency data on various factors.  The CDC reports that 264,505,725 doses of the vaccine have been distributed with 209,406,814 doses injected.  The number receiving at least one dose is 131,247,546, while the number of second doses, which would grant the highest level of immunity, is 84,263,408.  Half of U.S. adults have received at last one dose of a COVID-19 shot, and 25% are fully vaccinated.  All adults are now eligible for a vaccination.  The FT has a page on global vaccine distribution.