Our Comment today opens with an update on the Russia-Ukraine war, where Russia’s refocus on attacking eastern Ukraine still seems stalled, but Western officials, sensing Russian weakness, continue to call for stronger support for the Ukrainians.  We next review a range of international and U.S. developments with the potential to affect the financial markets and close with the latest news on the coronavirus pandemic.

Russia-Ukraine:  As Russian forces continue to probe Ukrainian defenses in the eastern region of Donbas and along Ukraine’s southern coast, they also conducted precision missile strikes against five Ukrainian railway stations in central and western Ukraine yesterday.  The strikes were likely an effort to disrupt Ukrainian reinforcements to eastern Ukraine, hinder Western aid shipments, and warn the U.S. off from providing more support for Ukraine after Secretary of State Blinken and Secretary of Defense Austin visited Kyiv over the weekend.  Meanwhile, local Ukrainian counterattacks retook some territory north of Kherson and west of Izyum.  Separately, there are increasing fears of an eventual Russian move on Moldova, where there have been several mysterious explosions this week, including one that destroyed a radio transmission tower used to broadcast Russian-language programming.  Some fear the explosions are intended to provide cover for a Russian invasion to protect Russian-speaking inhabitants of Moldova. 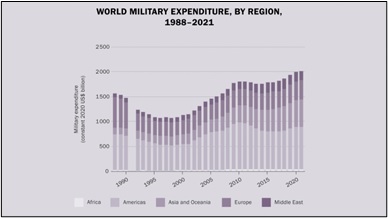 China:  President Xi has reportedly ordered his economic officials to ensure that Chinese GDP grows faster than U.S. GDP this year, despite the rise in China’s COVID-19 infections and the government’s own disruptive economic lockdowns to combat them.  In response to the directive, Chinese government agencies are discussing plans to accelerate extensive construction projects, especially in the manufacturing, technology, energy, and food sectors.  They are even considering a plan to issue coupons to individuals to spur consumer spending,

Japan:  Even though the yen has rebounded a bit so far this morning, it remains near its 20-year low of almost 130 per dollar, prompting increased speculation that the Bank of Japan might intervene in the market to prop up the currency for the first time since 1998.  (Of course, the flip side to the weak yen is the extraordinarily strong dollar, which has been boosted by strong U.S. economic growth and the Federal Reserve’s aggressive plans to boost interest rates.  The U.S. Dollar Index, which tracks the greenback against six other currencies, including the euro and sterling, is now at its highest level since March 2020 and is up roughly 12% in the past year.) 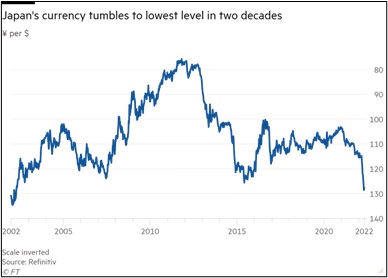 Canada:  In parliamentary testimony, Bank of Canada Governor Macklem said his policy board would consider another 50-basis-point hike in its benchmark interest rate at its next meeting on June 1.  That would follow the central bank’s 50-basis-point hike earlier this month, bringing the benchmark rate to 1.0%.  The statement underscores the extent to which some major central banks are panicked about inflation and intend to tighten monetary policy aggressively in the coming months, despite the risk of excessively slowing down economic growth and unsettling financial markets.

U.S. Monetary Policy:  The Senate today expects to vote to confirm Lael Brainard as the Federal Reserve’s new vice-chair.  The Senate has also taken steps to schedule a vote to confirm economist Lisa Cook as a member of the board.  It is still unclear when the Senators will vote to confirm Jerome Powell to a new term as chair or Philip Jefferson as another new board member.  In any case, we do not expect the newly confirmed policymakers to change the Fed’s rate-hiking intentions in the near term.

U.S. Consumer Spending:  Several sellers of big-ticket consumer goods, ranging from appliances to mattresses, have reported they have seen a drop-off in demand.  Corporate leaders ascribe the drop to several factors, including high inflation, rising interest rates, reduced savings balances, and rising pessimism from the Russia-Ukraine war.  As we have noted previously, all those factors point to an increased risk of recession and troubled financial markets in the coming 12 to 18 months.

COVID-19:  Official data show confirmed cases have risen to  510,286,262 worldwide, with 6,221,232 deaths.  The countries currently reporting the highest rates of new infections include Germany, South Korea, France, and Italy.  (For an interactive chart that allows you to compare cases and deaths among countries, scaled by population, click here.)  In the U.S., confirmed cases rose to 81,043,362, with 991,609 deaths.  In data on the U.S. vaccination program, the number of people considered fully vaccinated now totals 219,370,557, equal to 66.1% of the total population.