Today, we open our Comment with an update on the Russia-Ukraine war; reports suggest Russian forces have launched the long-anticipated Battle for Donbas.  We next review a range of international and U.S. developments with the potential to affect the financial markets.  We close with the latest news on the coronavirus pandemic.

Russia-Ukraine:  In an address last night, Ukrainian President Zelensky announced that the Battle of the Donbas has begun, with Russian forces launching a major offensive along the line of control running through eastern Ukraine from Kharkiv to Donetsk, Luhansk, and the southeastern port city of Mariupol.  While that couldn’t be confirmed, U.S. military sources said the Russians have increased the number of their battalion tactical groups (BTGs) in the region to approximately 75 and were taking preliminary steps for a major attack.  Russian forces also continue trying to stamp out the last remaining Ukrainian defenders in Mariupol by dropping “bunker buster” bombs on them.  The U.S. and its NATO allies are therefore accelerating their efforts to ship heavier weapons to the Ukrainians and train their soldier on how to use them.  In the coming days, the U.S. expects to move forward with training Ukrainian troops outside of Ukraine on using howitzers and new radar systems, including counter-battery radars to pinpoint the course of Russian artillery fire. The U.S. is sending more than a dozen 155-mm howitzers as part of a fresh infusion of weapons.

France:  Days ahead of the final round of the presidential election on Sunday, a French investigative news site has published extracts of an EU report alleging that far-right populist candidate Marine Le Pen misappropriated more than €100,000 of EU parliamentary funds.  The EU’s anti-fraud office confirmed it had finalized a report last September, while Paris prosecutors said they received the allegations in March and have begun examining them.

Israel:  The Israeli military today carried out airstrikes in Gaza in response to a rocket fired from the Palestinian territory, raising fears of a wider conflict amid heightened tensions after days of clashes at a sensitive holy site in Jerusalem.

United States-China:  Despite the renewed Russian threat in Europe, the U.S. continues to reorient its military toward the Asia-Pacific region to counter the rising threat from China.  The U.S. Navy has now designated Guam as the home port for five Los Angeles-class fast-attack submarines, up from just two as recently as November.

U.S. Monetary Policy:  St. Louis FRB President Bullard, perhaps the most notorious uber-hawk on the Fed’s policy-setting committee, said he wouldn’t rule out a 75-basis-point hike in the benchmark fed funds rate in the coming months, although he suspected a series of 50-basis-point hikes would be sufficient to tame inflation.  According to Bullard, the fed funds rate should stand at about 3.50% at year’s end. 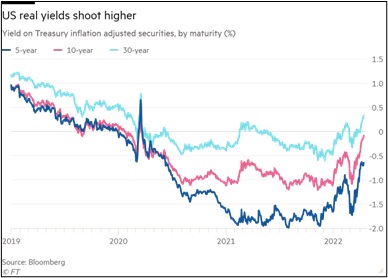 U.S. Housing Market:  Privately held online mortgage provider Better.com has launched its third round of layoffs since December and its first cuts since offering voluntary buyouts to some employees nearly two weeks ago.  With housing inventory low, prices soaring, and mortgage interest rates rising fast, the downsizing at Better.com is one of the first signs that a slowdown in the housing market may be at hand.

U.S. Labor Market:  The NLRB ruled that workers at an Amazon (AMZN, $3,055.70) delivery center in New Jersey have won the right to hold a vote on unionizing the facility.  If successful, the vote would mark the company’s second facility to be unionized after a successful process at a warehouse in New York earlier this month.