A confluence of events is conspiring to harness the expansion and thereby rattle markets. These include an increasingly hawkish Fed eager to tame inflation by assertively tightening monetary policy, war in Ukraine, elevated energy prices, rising bond yields, U.S. fiscal tightening, continuing recovery from the pandemic, overcapacity in trucking, and deglobalization and supply chain adjustments. Beginning with the Fed, the minutes from the March meeting indicate a balance sheet reduction of $95 billion per month in conjunction with continued increases in the fed funds rate, potentially as much as +50 bps in early May, and they believe the tight labor markets provide the latitude to continue to raise rates rapidly. As of this writing, many expect fed funds to end 2022 at 2.00%-2.25%, with the possibility of further hikes next year. Policymakers’ attempts to staunch inflation carry the risk of being too much too late, leading to the potential for a policy-induced economic slowdown. However, the Fed is certainly afforded the discretion to pause its rate-hiking efforts at any juncture as it assesses the inflationary landscape. Therefore, the current projected policy rate of 2.03% based upon the implied LIBOR rate two years out, as depicted in the accompanying chart, does have the potential to roll over without a recession occurring, as we saw in 1994. While a de facto tightening of U.S. fiscal policy is in process, as COVID relief is largely past, the readjustments in supply chains are underway as evidenced by the related overcapacity in the domestic trucking industry. While the potential for a policy mistake exists, the bond and stock markets seem to have discounted the possibility to some extent through their declines thus far this year. 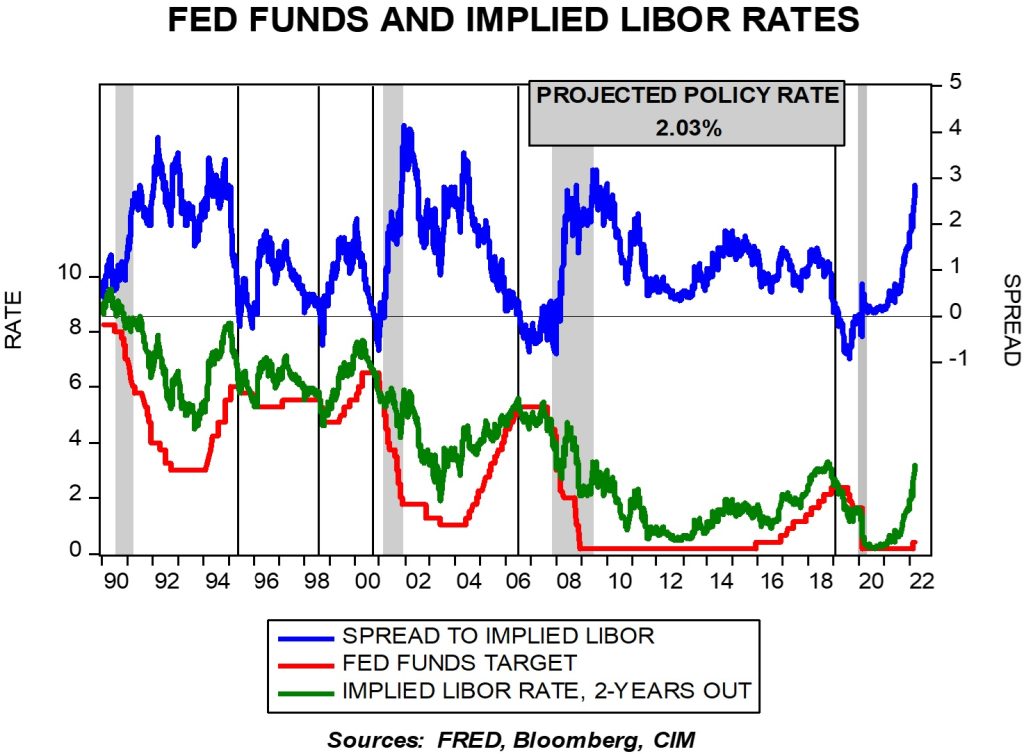 In contrast to the U.S. Federal Reserve, the European Central Bank [ECB] and the Bank of Japan [BOJ] maintain accommodative monetary policies despite inflationary pressures. Although the ECB still intends to curtail its net purchases for its balance sheet in the third quarter, adjustments to key interest rates will not occur until sometime after the net purchases end. In addition, principal from maturing securities from both the asset purchase program and the pandemic emergency purchase program will continue to be reinvested, further testifying to the ECB’s accommodative stance. Similarly, in mid-March the BOJ furthered its commitment to cap the yield on 10-year Japanese government bonds at 0%. As both banks continue their forms of monetary accommodation in the face of inflationary pressures, the potential exists for further weakness in the exchange rates of their respective currencies. As is customary, central banks in emerging countries produce a mixed bag of policy responses. China, by far the largest, is maintaining its zero-COVID strategy with the resultant negative effects to its GDP. The People’s Bank of China recently unveiled stimulus in the form of a reduction in its reserve requirement for major banks, not only to counteract pandemic policies but also due to weak credit growth and ongoing problems in its property segment. Although the Reserve Bank of India is also keeping its key lending rate at a record-low level, the central banks of Mexico, Brazil, South Korea, and Indonesia are decidedly hawkish.

The fractures and fissures created by the varying responses of central banks to the shifting economic tectonic plates increase the likelihood of a slowdown from the rapid global economic growth enjoyed over the past two years. In the extreme, the potential for a single or even multiple policy errors raise the odds for a global recession. Accordingly, we felt it was necessary to conduct an extensive examination of risk and adjust risk assets in our Asset Allocation strategies this quarter.

An inflationary environment fraught with the potential for policy error casts a shadow on equity prices. Adding to an already murky picture for equities are the Ukraine war, COVID shutdowns in China, and supply chain reconfigurations, among other issues. Moreover, earnings of U.S. companies relative to GDP are high by historical measures (see chart). While these concerns may combine to flash a cautionary light on equities, several fundamental forces could help buoy prices and advance returns over our three-year forecast period. First, a substantial amount of cash remains on the sidelines among investors, both institutional and retail, and household balance sheets are healthy. Second, while P/E levels are currently elevated and have been prone to compress in the past during bouts of inflation, in several instances the P/E on the S&P 500 has been much higher and rose further over several years prior to falling. Additionally, while P/E compression may often be caused by a lowering of the numerator in the equation, in a number of sectors inflation will assist in raising the denominator. Third, the adage that the stock market usually climbs a wall of worry may be apt as an increasing proportion of market participants are expecting a recession. Finally, while the Fed is currently determined to thwart inflation, it has repeatedly displayed very accommodative monetary policies in the past when financial conditions have deteriorated. 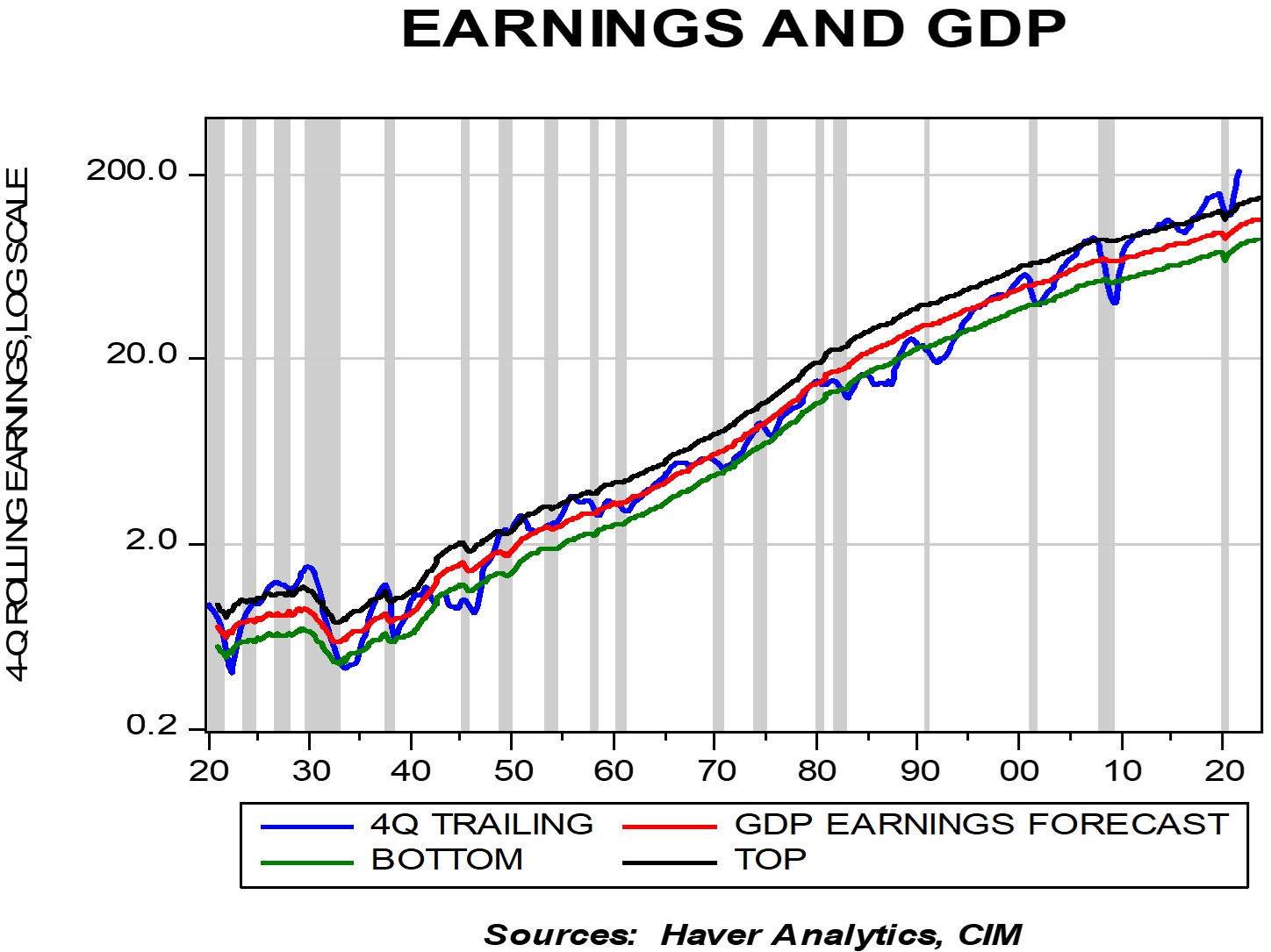 Although an outright deep recession is not a part of our consensus forecast over the next three years, a significant economic slowdown carries a high probability. Whether such a slowdown is accompanied by persistent inflation in some segments or by a period of deflation is obviously yet to be determined and to a degree dependent on the tenacity of the Fed and business and consumer sentiment. In either event, the equity positioning in our strategies reflects a reduction in risk, both through decreased allocations and our selection of exposures. We maintain a significant bias of 65% to value stocks as they tend to outperform as economic growth wanes. In addition, the concentration among top names is much lower as evidenced by the top five companies in the S&P 500 Growth Index accounting for 45.5% versus 11.6% in the S&P 500 Value Index. To complement the value skew, there is now an overweight to the defensive segments of Health Care and Consumer Staples as well as Energy. The overweights to the more cyclically oriented sectors of Materials, Financials, and Housing were eliminated. Finally, we believe the Ukraine war has advanced the timetable for an increase in defense expenditures among numerous countries, and therefore we have initiated a position in the aerospace and defense industry.

The risk reduction also applies to the international exposures as we decreased allocations in three strategies and changed the composition. Although we find valuations in developed market stocks to be more grounded compared to U.S. counterparts, the broad-based exposure is no longer augmented by overweights to continental Europe and the U.K. In lieu of these positions, we now hold an overweight to Japanese equities with a currency hedge due to the attractive pricing of Japanese stocks coupled with BOJ policies contributing to a depreciating yen. Emerging markets are now absent from all strategies.

With the Fed intent upon stamping out inflation, we expect Treasury yields within five years of maturity to react directly with the increases in fed funds. Although we find longer-term issues to be somewhat anchored by demand from liability-driven investment pools, we anticipate a clouded supply/demand outlook created by the runoff from the Fed shrinking its balance sheet, economic sanctions on Russia affecting appetites for longer-dated Treasuries from other global central banks, and lower supply from the Treasury as the deficit narrows. While we recognize that the Fed has the potential to spark a downturn within the next 12-18 months, over our three-year forecast period we expect positive total returns from the intermediate bond segment stemming from higher coupons more than compensating for potential weakness in bond prices. Echoing our cautious positioning in equities, the bond allocations are largely in the intermediate-term segment or shorter in strategies that have an element of income. We find this appropriate in an environment where the Fed is aggressively tightening. Our consensus view on corporate bonds calls for a widening of spreads as the economy weakens; however, we find speculative grade bonds hold advantages as equity surrogates as they are higher in the capitalization structure on corporate balance sheets. Accordingly, speculative grade bonds are positioned in the strategies that have income as an objective, though the exposure is in bonds rated BB in order to avoid risks inherent in lesser rated, marginal companies should the economy contract.

We continue to find that REITs in the aggregate are close to being fully valued. Although REITs have historically fared well when faced with elevated inflation, their high relative valuations coupled with the notion that REITs can come under pressure in the early stages of a rising rate environment reinforce our view that the potential risk/return is more attractive elsewhere.

Commodities remain elevated and are even increased in the more growth-oriented strategies given the utility they offer as portfolio stabilizers as the potential for risk increases. Gold is retained across all strategies given its benefits as a haven from heightened geopolitical risk. A broad basket of commodities, with an emphasis on energy, is employed across all strategies and represents the majority of the commodity exposure in the strategies designed for growth. As the globe grapples with new routes for oil and its derivatives, we find this positioning to be potentially advantageous.