Our Comment today opens with an update on the Russia-Ukraine war, where it appears the southeastern city of Mariupol is about to fall to the Russians.  We next review a range of international and U.S. developments with the potential to affect the financial markets today.  We wrap up with the latest news on the coronavirus pandemic.

Russia-Ukraine:  The military situation in Ukraine remained largely unchanged over the holiday weekend.  Russian forces continue to regroup, reequip, and reposition for a concentrated effort to seize control of the Donbas region of eastern Ukraine and the country’s southern coast.  The initial skirmishes in that effort are already taking place, and the Ukrainian forces in the besieged southeastern port city of Mariupol may not be able to hold out much longer, although the Russians’ main attack may still be a week or two away.  In the meantime, the Russians continue to attack primarily military targets throughout the country with artillery, missiles, and aerial bombardment.

France:  With just one week to go before the final round of France’s presidential election on April 24, President Macron has tried to blunt far-right challenger Marine Le Pen’s populist attacks by calling for an EU-wide cap on corporate executives’ pay.  Macron is also making a play for France’s left-wing voters by emphasizing his support for renewable energy sources.  The latest polls suggest Macron will win the election with 54% of the vote, compared with 44% for Le Pen, but the president clearly isn’t leaving anything to chance.

China:  While U.S. markets were closed on Friday, the People’s Bank of China announced it would cut its reserve requirement ratio for major banks to 8.10% from 8.35%.  To counter the Chinese economy’s slowdown in response to new pandemic lockdowns, high inflation, and the government’s regulatory crackdown on key industries, the central bank’s move is expected to spur an additional $80 billion in bank lending throughout the country.

Israel:  Palestinian-Israeli violence continued to boil over the weekend, with clashes in the area around Jerusalem’s Al-Aqsa Mosque, Islam’s third-holiest site.  At the same time, Prime Minister Bennett is struggling to adjust to the defection of one of his party’s parliament members, which has deprived him of his one-seat majority.

U.S. Economy:  Amid mixed signals regarding just how pessimistic U.S. consumers are about the economy, earnings releases by major banks show credit-card spending is rising briskly.  Higher card spending and continued consumer optimism would suggest that the economy can keep growing in the near term.  Yet, we continue to think that factors like high inflation and rising interest rates are creating a significant risk for a recession in perhaps 12-18 months.

Global Bond Markets:  With inflation surging and central banks around the world hiking interest rates, new data shows the value of global bonds offering a negative yield has fallen to $2.7 trillion from $14.0 trillion as recently as mid-December.  In the U.S., the 10-year Treasury note is currently yielding 2.830%, its highest level since late 2018. 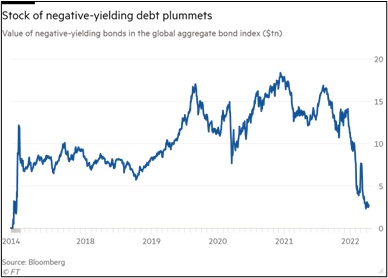 Latin American Agriculture:  As we’ve noted before, food supply disruptions arising from the Russia-Ukraine war have further boosted global food prices.  One region that seems well placed to take advantage of that is Latin America, where farmers are looking to help fill the gap for wheat, corn, soybeans, and other products that are no longer available from Russia and Ukraine.  Because of the expected economic boost from stronger prices for food products, minerals, and other commodities, we think Latin American equities are now more intriguing than they have been in a long time.

Mexico:  President Andrés Manuel López Obrador has failed to push through Congress a controversial reform of the country’s energy industry that would have favored state-owned electricity utility CFE over private generators.