Over the past year, U.S. relations with Iran have deteriorated.  In May 2018, President Trump announced he would withdraw from the Joint Comprehensive Plan of Action (JCPOA), a multinational treaty that was designed to slow, but not eliminate, Iran’s nuclear development.  As part of exiting the JCPOA, the U.S. reapplied sanctions that have reduced Iran’s oil exports.  Since the U.S. has taken this action, the Iranian economy has suffered, with inflation rising to dangerous levels. 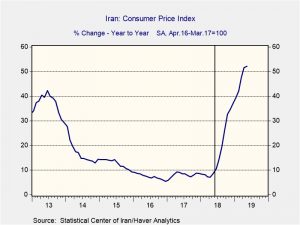 This chart shows the yearly change in Iran’s CPI.  We have placed a vertical line at the point where the U.S. pulled out of the JCPOA.  Note that inflation has jumped from a yearly increase of 10% to over 50%.

Sanctions have dramatically reduced Iran’s oil exports, shown on the following chart.  Before the U.S. withdrawal, Iran was exporting around 2.5 mbpd of crude oil.  That number has declined to 0.3 mbpd.

Iran has been threatening to retaliate in the face of a weakening economy.  In a previous report last year, we examined potential responses by Iran.  These included restarting the nuclear program, projecting power into the Middle East, closing the Strait of Hormuz, deploying a cyberattack, building a coalition against the U.S. and renegotiating the JCPOA.

Some of the actions that Iran might take could escalate into a hot war with the U.S.  In this report, we will begin with an examination of the geography and geopolitics of Iran.  Using this information, we will discuss what a war with Iran might look like.  We will also reflect on the very nature of war and alternatives to the use of military force within the context of Iran.  As always, we will conclude with market ramifications.