Our position has been that we have experienced the apex of globalization and a steady cycle of deglobalization will occur over the next few decades.  This is the context in which we should view the current American political situation.  Political pundits tend to focus on personalities, which are important in the short term.  However, in the long term, it is no surprise to us that we have a president who is jaded on America’s superpower role given where we are in the globalization/deglobalization cycle.

Notwithstanding, we believe there are peculiar circumstances in the current environment that offer interesting insights into how conditions may evolve.  This evolution is important to investors as it will affect valuations of financial assets.  Inflation is a key depressant to financial asset values.  Deglobalization will almost certainly lead to higher price levels over time.  But, how that process develops is important.  For example, war would likely bring a rapid increase in inflation.  On the other hand, a steady contraction of supply chains and reduction in trade would lead to a much slower rise in inflation. 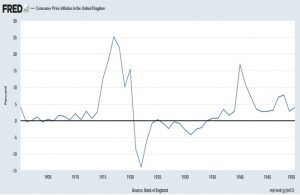 This chart shows British inflation from 1900 to 1950.  The war years show an obvious spike in inflation.

In Part I of this report, we will discuss the end of the Cold War and the reactions of U.S. policymakers to that event.  In Part II, we will begin with a reflection on markets, continue with an examination of hegemony and conclude with the expansion of globalization and the rise of meritocracy and its discontents.  In Part III, we will discuss how China and Russia threaten U.S. hegemony, the potential responses and conclude with market ramifications.

[1] A good study of this history can be found in Kevin O’Rourke’s and Ronald Findlay’s book. O’Rourke, K. and Findlay, R. (2007). Power and Plenty: Trade, War and the World Economy in the Second Millennium. Princeton, NJ: Princeton University Press.