Two weeks ago, we introduced this report with a review of the basics of the reserve currency and the savings identity.  This week, we will examine two important historical analogs, the Nixon and Reagan administrations.

#1: The Nixon Analog
As President Nixon prepared for the 1972 presidential campaign, he faced a number of serious problems.  First, inflation was increasing. 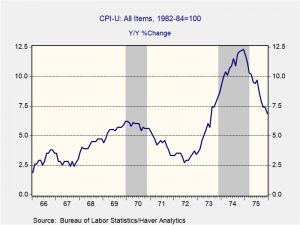 As the chart below shows, the increase in interest rates led to a recession, ending the long economic expansion that began in March 1961.  The recession, which ran from December 1969 to November 1970, was not an especially harsh one, but Nixon knew that if he didn’t boost the economy in 1971 his reelection chances would be significantly diminished.