In this five-part series on the geopolitics of the 2020 election, we have broken the reports into nine sections. In Part I, we covered the basics of public finance.  This week, we will cover the second and third sections, understanding the electorate and party coalitions.

Understanding the Electorate
Understanding the electorate is about divining the psychological and economic interests of voters.  In this section, we describe how we examine the voting public.

There is a distinction between class and identity.  Identity is complicated.  All of us belong to various groups based upon our gender, race, religion, age, geographic location, education, etc.  The interlacing of these various memberships is known as intersectionality.  Although the term is often applied to those who face discrimination, in general, this term captures the various “tribal” groups to which we find ourselves belonging.  Thus, a white, gay, Catholic with a graduate degree may have something in common with a Hispanic, straight, Catholic with a high school diploma through their religious affiliation.  However, it is unlikely the commonality would be very strong.  In general, the greater the identity overlap a person has with others the higher the probability they will vote for or favor candidates of a similar persuasion.  At the same time, each person tends to “rank order” their identities; some put a much higher rank on race relative to religion, for example.  Or, their geographic location is the most important identity classification.

Class is rather straightforward, determined by the decile in which one’s income and wealth falls.  This breakdown isn’t perfect, however, as the class interests between two people with equal income can differ.  For example, if two middle managers at different firms make the same income, but one manager’s firm benefits from free trade and the other does not, they may favor different economic policies.  But, in general, policies favored by class tend to be uniform.  For example, the wealthy tend to have similar positions on taxes, while the less affluent tend to think very highly of Social Security.

We define a group as the cross-section of identity and class.  A group is a set of like-minded people who tend to support similar political, economic and social positions.

To describe the interplay between identity and class, we have borrowed this grid from Peter Zeihan. 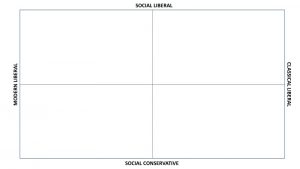