Crude oil inventories fell more than anticipated, declining 9.4 mb compared to forecasts of a 2.0 mb decline.  The SPR declined 1.3 mb; since peaking at 656.1 mb in July, the SPR has drawn 7.9 mb.  Given levels in April, we expect that another 13.2 mb will be withdrawn as this oil was placed in the SPR for temporary storage.  Taking the SPR into account, storage dropped 10.7 mb.

The data this week was affected by Hurricane Laura.  Usually, the energy trade is disrupted when a large hurricane enters the Gulf of Mexico.  Although oil exports and imports fell, the latter’s decline was much larger, supporting the decline in inventory levels.  This drop occurred despite a sharp decline in refining activity.  We expect the refiners that closed for precautionary reasons will reopen soon whereas those who suffered damage will be down for longer.  Imports should resume in next week’s report and a rise in stockpiles is likely.

Based on our oil inventory/price model, fair value is $41.00; using the euro/price model, fair value is $64.26.  The combined model, a broader analysis of the oil price, generates a fair value of $52.74.  The wide divergence continues between the EUR and oil inventory models.  As the trend in the dollar rolls over, it is bullish for crude oil.  Any supportive news on reducing the inventory overhang could be very bullish for crude oil.

Gasoline consumption has started to edge higher.  Although we probably won’t see the usual seasonal decline in consumption (there wasn’t much of a vacation season), the improvement we are seeing is consistent with a slow recovery of the economy. 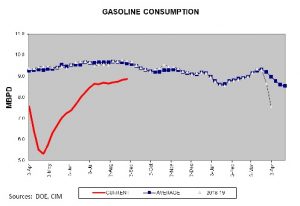 In oil news, reflecting the above chart, data from Upwork shows there has been a significant decline in commuting due to the pandemic.  The report suggests that some 890 MM fewer miles per day are being traveled.

Nuclear power has suffered from adverse public relations for years.  Although it may be the greenest of electric power (it generates no CO2), the waste product is a problem.  But, the tragedy of Chernobyl and the near miss of Three Mile Island undermined public confidence.  And so, we note with great interest plans to produce small, self-contained nuclear reactors.  In theory, these could be stacked to become larger reactors.  It isn’t clear if these new reactors will solve the problem of nuclear waste, but these developments could lead to a new path for this power source.