Here is an updated crude oil price chart.  The oil market has come under pressure following the decline in equity prices this week.  Although volatility has been falling since April, recent option market activity suggests traders are bracing for larger prices swings in the coming weeks.

Crude oil inventories rose when a decline was expected.  Commercial stockpiles rose 2.0 mb compared to forecasts of a 3.2 mb decline.  The SPR declined 0.2 mb; since peaking at 656.1 mb in July, the SPR has drawn 8.1 mb.  Given levels in April, we expect that another 13.0 mb will be withdrawn as this oil was placed in the SPR for temporary storage.  Taking the SPR into account, storage rose 1.7 mb.

The above chart shows the annual seasonal pattern for crude oil inventories.  This week’s data showed a modest rise in crude oil stockpiles.  We are starting the seasonal build period.  Stockpiles remain well above seasonal norms and remain a bearish factor.

Based on our oil inventory/price model, fair value is $40.31; using the euro/price model, fair value is $64.17.  The combined model, a broader analysis of the oil price, generates a fair value of $51.77.  The wide divergence continues between the EUR and oil inventory models.  As the trend in the dollar rolls over, it is bullish for crude oil.  Any supportive news on reducing the inventory overhang could be very bullish for crude oil.

Gasoline consumption fell a bit this week.  Seasonally, this is normal.  Driving tends to slow as vacation season ends.  As the chart shows, consumption declines slowly into mid-January.  This year may be different; if a vaccine is developed that increases commuting then we could see driving rise, but without that result we should expect overall demand to fall through Q4. 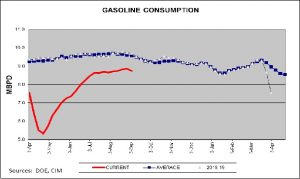 As the U.S. retreats from hegemony, China is extending its influence into the Middle East.  The Middle Kingdom is now Iraq’s largest trading partner and is also a major consumer of Iranian oil.  We have been waiting to see how other nations would respond to the change in U.S. status.  China is clearly filling the gap, although it will be interesting to see how it avoids the messy areas (Syria, Turkey) of the region to protect the oil flows.

There is growing evidence that the Kingdom of Saudi Arabia (KSA) has concluded that additional supply cuts will simply lead to lost market share.  Thus, it intends to maintain production levels even as prices show signs of weakening.

We continue to monitor what appear to be increasingly extreme weather events.  Recent hurricanes have been strong and the current fire season on the West Coast has been catastrophic.  Commodities markets are often used by traders to hedge or speculate on the impact of such events.  The Commodity Futures Trading Commission (CFTC) has noticed this tendency and a special climate committee has issued a warning calling for measures to be taken to address climate risks.  Carbon pricing markets could be part of the solution.

The Iranian tanker carrying gasoline bound for Venezuela that was seized in August has made its way to Texas this week.  It is unclear what the government intends to do with the fuel.