Crude oil prices remain under pressure due to recession fears.

In the details, U.S. crude oil production fell 0.1 mbpd to 12.0 mbpd.  Exports rose 1.1 mbpd, while imports fell 0.5 mbpd.  Refining activity plunged 3.0% to 90.6% of capacity.  We are in the usual period for autumn refinery maintenance, so falling refining activity should be expected for the next few weeks. 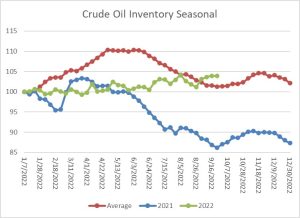