In the details, U.S. crude oil production was steady at 12.1 mbpd.  Exports were unchanged while imports rose 1.2 mbpd.  Refining activity rose 2.0% to 93.6% of capacity. 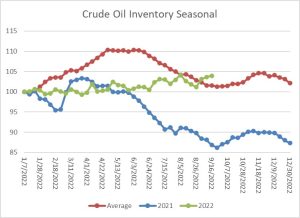 With so many crosscurrents in the oil markets, we are beginning to see some degree of normalization.  The inventory/EUR model suggests oil prices should be around $66 per barrel, so we are seeing about $20 of risk premium in the market.

In our weekly reporting above, we have been updating total U.S. oil inventories, both commercial and the SPR.  For years, analysts have tended to treat the two as different entities as commercial inventories are what is available and the SPR was only deployed in emergencies.  Price modeling, therefore, tended to focus on commercial storage.  The separation of commercial and strategic stocks made sense.  However, as our above analysis suggests, we have stopped treating the SPR as an emergency reserve and have begun considering it a buffer stock.

Buffer stocks are sometimes used in commodity markets to dampen price volatility.  When prices rise to a level considered “too high,” the buffer stock manager releases inventory, and when prices are “too low” the commodity is purchased.  In the 1970s, several commodities had buffer stocks, which were managed by producers.  All of them eventually failed because producers set a price well above the market clearing one.  Eventually, the buffer stock became too large, and the manager was forced to “dump” the stocks on the market, leading to a price collapse.  A buffer stock operated by a consumer would likely have the opposite problem since it would want to set a price well below the market clearing one.

Recently, the Biden administration floated an idea that if WTI fell to $80 per barrel or less, the SPR would buy oil to refill it.  We still harbor doubts that oil will ever be purchased by this administration, but this recent “trial balloon” is intriguing.  If this idea becomes policy, it will confirm that the SPR has become a buffer stock and the government is comfortable with an $80 per barrel oil price.  That is probably a high enough price to maintain current output, but if prices remain steady, the inflationary impact (inflation is a rate of change concept) would diminish over time.  In theory, the $80 per barrel becomes a floor, and it is unclear what price would trigger selling (the ceiling price), although one could imagine that a round number like $100 per barrel would be reasonable.  There remain numerous uncertainties about this concept, but we will continue to monitor developments.

Here’s the key point to all this:  from the late 1970s until recently, there was great faith placed on markets to solve problems.  Government intervention into the economy was normalized during the Great Depression and WWII but the inflation of the 1970s undermined the idea that the government could manage the economy.  The infamous gas lines of the 1970s occurred, in part, due to price caps on product.  When it became unprofitable to refine gasoline at the cap price, shortages developed.  Markets do work, but they are focused on efficiency, not equality.  In other words, high gasoline prices did increase available supply and eased demand, but the burden of the policy fell more heavily on lower income households.  The government using the SPR as a buffer stock could suggest a return to the pre-Reagan/Thatcher era. 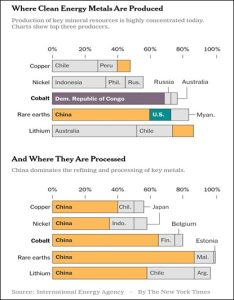