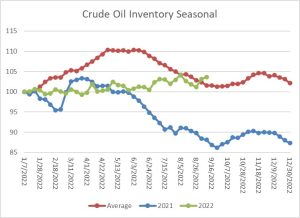 The SPR has been falling rapidly. 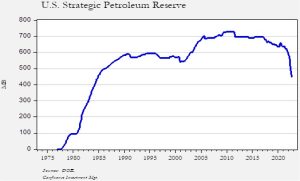 With so many crosscurrents in the oil markets, we are beginning to see some degree of normalization.  The inventory/EUR model suggests oil prices should be around $66 per barrel, so we are seeing about $20 of risk premium in the market.

Now that summer is behind us, it’s time to examine the state of the natural gas market as winter approaches.  Currently, on a rolling 12-month basis, supply is exceeding consumption. 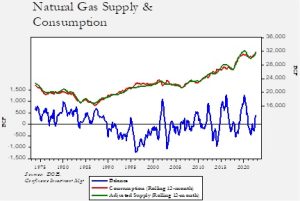 Some of the supply improvement has come from rising net imports.  As the chart below shows, the U.S. was a net importer of natural gas until late 2017 (again, on a rolling 12-month basis).  Since then, the U.S. is a net exporter, hence the negative net import reading. The recent rise in net imports appears to be tied to the Freeport LNG disruption, as LNG exports have fallen.  By next spring, that facility is expected to be at full production, which will reduce American supplies, assuming steady production. 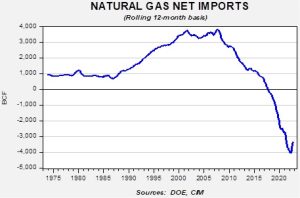 Although supply has been ample, hot summer weather has lifted consumption and puts the U.S. at a modest storage deficit going into autumn. 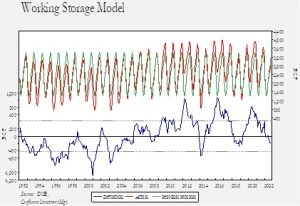 This model seasonally adjusts storage levels, and the deviation line shows the difference between current and normal storage.

Expectations of rising LNG exports have pushed U.S. natural gas prices well above seasonal norms.  As always, the key to prices in the winter is temperature.  One way to measure the impact of temperature on energy demand is using the concept of the degree day.  The degree day measures the average temperature (high + low/2) compared to 65o with the idea that no climate control is necessary at that temperature.  If above 65o, cooling is required while if below, heating is required.  The temperature deviation is then adjusted by population.  Below are the deviations from normal.

Heating degree day values tend to be higher than cooling because extreme cold is more common than extreme heat.  A temperature of 0o generates a heating degree day where the equivalent would be 130o for a cooling degree day.  Thus, on the above charts, we have scaled the degree days equally.  Casual observation would suggest that winters have become milder as the last extreme cold month, December 2000, was a heating degree day of 200 which has not been exceeded since.  Such readings were far more common in the 1970s.  On the cooling side, there is a clear upward drift in deviations.  It is quite possible that rising greenhouse gas levels are a factor in both warmer winters and hotter summers, but one cannot rule out longer cycle factors, such as sunspots.  What this means for natural gas markets is that colder winters may not be as bullish a factor as it once was, but summers pay a larger role in demand.