Prices continue to hold above $70 per barrel. 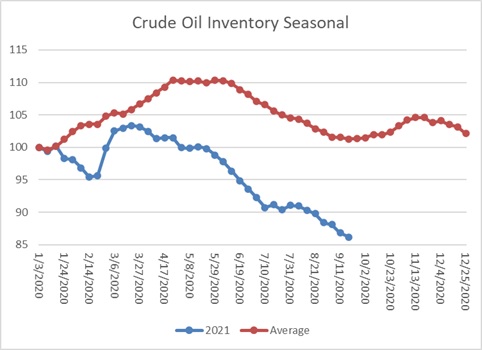 This chart shows the seasonal pattern for crude oil inventories.  We are in the autumn consolidation and build season.  Note that stocks are significantly below the usual seasonal trough.  Our seasonal deficit is 78.1 mb.  We expect the disruptions from Hurricane Ida (see below for updates) will affect this data in the coming weeks.

Hurricane Ida followed a path similar to Hurricane Katrina.  For the next few weeks, we will track the impact of Ida on the oil and gas market, using Katrina as a baseline comparison. 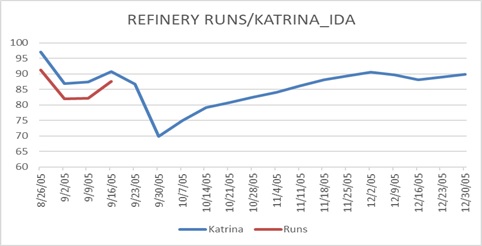 This chart compares refinery runs during the two periods following the hurricanes.  This week, refinery operations recovered strongly.  In 2005, Katrina was soon followed by Hurricane Rita.  Barring a repeat, we would assume refineries will continue to come back online. 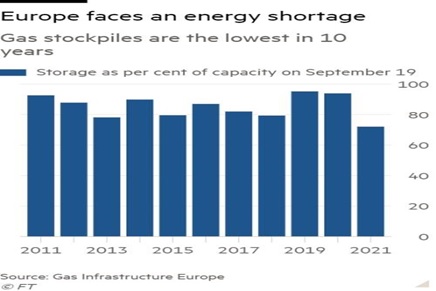 Three more U.K. natural gas suppliers to consumers have failed this week, stranding 1.5 million homeowners without natural gas service.  The firms apparently provided price caps without adequate price hedges, and as natural gas prices have soared, the firms were losing money on each BCF they provided.  The firms are asking for government help, perhaps even creating a “bad bank” for customers with contracts that can’t be fulfilled.   Meanwhile, other EU governments are considering emergency aid to households faced with soaring power bills.