Prices moved above $70 per barrel. 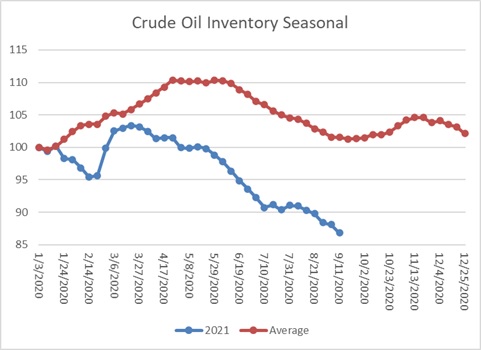 This chart shows the seasonal pattern for crude oil inventories.  We are in the autumn consolidation and build season.  Note that stocks are significantly below the usual seasonal trough.  Our seasonal deficit is 75.8 mb.  We expect the disruptions from Hurricane Ida (see below for updates) will affect this data in the coming weeks.

Hurricane Ida followed a path similar to Hurricane Katrina.  For the next few weeks, we will track the impact of Ida on the oil and gas market, using Katrina as a baseline comparison.  Firms continue to struggle to resume production after the event. 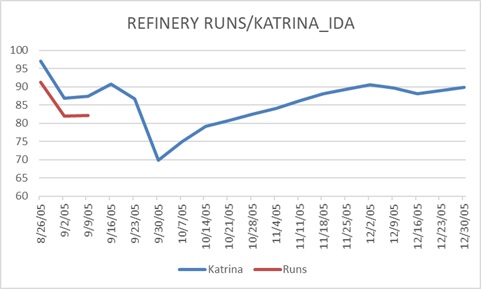 This chart compares refinery runs during the two periods following the hurricanes.  Refineries require electricity to operate, and damage to the electrical grid slows the recovery from the storm.  With Katrina, runs stabilized over the following few weeks, only to fall further by the end of the month.  We see a similar pattern with Ida.  We doubt we will see a similar plunge this year.  In the year Katrina hit the Gulf, it was followed a few weeks later by Hurricane Rita.  Therefore, if another storm hits the area, this chart gives us an idea of what might transpire.

Natural gas update:  We are seeing clear warnings that natural gas prices could be elevated this winter.  Europe is already facing a squeeze on supply and record prices.  By winter, it could be a crisis.  Global storage levels are tight, and with the advent of LNG, it means the U.S. supply situation is tightening as well.  The U.S. is warning that this situation will increase Europe’s reliance on Russian gas, which will give Moscow leverage over the EU.

Supply has been falling for the past several months.  Even though consumption is also falling, it is declining more slowly, leading to a negative balance.  That is bullish for prices.  The supply problem seems to be tied to two issues.  Net imports are sharply negative (or, put another way, the U.S. is now a net exporter), and production has stalled.  On a yearly basis, production peaked in April 2020 and has fallen 3.6% since then.  The most likely reason is the lack of investment in new output.

The chart on the left shows supply (production + net imports) and consumption on a rolling 12-month basis.  The lower line shows the balance.  Although we don’t expect these imbalances to lead to the explosive rise in prices seen in the first decade of the century, $6.00 per MMBTU isn’t out of the question.

The imbalance has led to tightening inventory levels.  It appears increasingly likely we will enter the winter with less-than-normal stockpiles.