Prices continued to consolidate in the high $60s.

Crude oil inventories fell 1.5 mb compared to the 6.0 mb draw forecast.  Analysts (including us) were clearly expecting Ida to bring a large draw.  However, the drop in exports and the slide in refinery operations prevented a significant decline.  The SPR was unchanged this week. 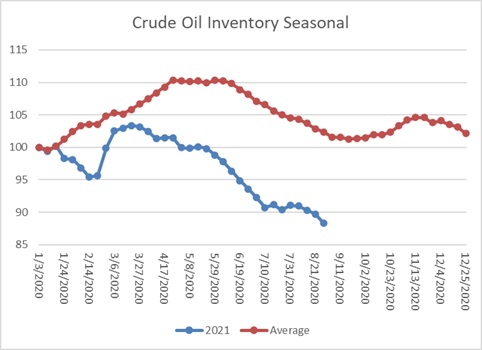 This chart shows the seasonal pattern for crude oil inventories.  We are at the end of the summer withdrawal season.  Note that stocks are significantly below the usual seasonal trough.  A normal seasonal decline would result in inventories around 550 mb.  Our seasonal deficit is 69.7 mb.  We expect the disruptions from Hurricane Ida (see below for updates) will affect this data in the coming weeks.

Hurricane Ida followed a path similar to Hurricane Katrina.  For the next few weeks, we will track the impact of Ida on the oil and gas market, using Katrina as a baseline comparison.  This week, we will look at refinery operations. 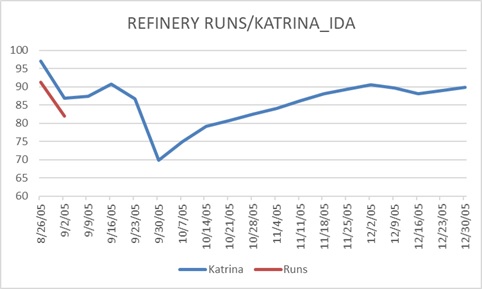 This chart compares refinery runs during the two periods.  Refineries require electricity to operate, and damage to the electrical grid will slow the recovery from the storm.  With Katrina, runs stabilized over the following few weeks, only to fall further by the month’s end.  We doubt we will see a similar plunge this year, as outside the Gulf region, most refinery activity was already depressed.

Although these increases pale in comparison to the first decade of the century, they are in a range of highs seen in the shale era.  With the expansion of LNG, natural gas has become a more global commodity.  We note supplies are tight in Europe, making the region vulnerable to a cold winter.  It will also support U.S. prices as producers struggle to meet global demand.