Commercial crude oil inventories rose 0.5 mb when a 1.2 mb decline was expected.  The SPR declined 8.8 mb; since peaking at 656.1 mb in July, the SPR has drawn 11.7 mb.  Given levels in April, we expect that another 7.1 mb will be withdrawn as this oil was placed in the SPR for temporary storage.  Taking the SPR into account, storage fell 0.6 mb.

The above chart shows the annual seasonal pattern for crude oil inventories.  This week’s data showed a small rise in crude oil stockpiles, which is normal.  Inventories tend to make their second seasonal peak about mid-November.  Tropical activity continues, which will affect the data for the next couple of weeks.

Based on our oil inventory/price model, fair value is $42.66; using the euro/price model, fair value is $62.36.  The combined model, a broader analysis of the oil price, generates a fair value of $51.61.  The wide divergence continues between the EUR and oil inventory models.  As the trend in the dollar rolls over, it is bullish for crude oil.  Any supportive news on reducing the inventory overhang could be very bullish for crude oil.

Distillate consumption rose this week but remains well below average.  We are also in a period where consumption tends to rise as (a) households top off their home heating tanks, and (b) shipments for Christmas begin to rise.  If we don’t see sizeable demand building in the coming weeks, it will add to evidence that the economy’s recovery is stalling, something the FOMC has been warning about for the past few weeks. 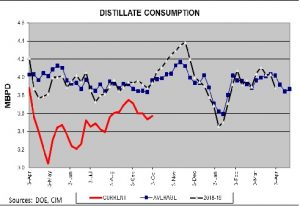 One of the problems with our currently divided political system is that policy vacillates between extremes.  That makes investment planning difficult.  In the resulting vacuum, state governments, working in concert, are establishing their own regulations and protocols.  This week, a group comprising power supplies and traders, facilitated by the Federal Energy Regulatory Commission, met to examine the concept of carbon pricing.  Utilities are starting to face different state regulatory environments and the goal of the meeting is an attempt to create a common set of guidelines.  Carbon pricing would give utilities and regulators a tool to manage emissions.  If carbon pricing goes forward, not only would renewables benefit, but nuclear power would also have a chance at recovery.  Last week, we noted investment in mini-reactors.  The U.K. is offering a £2.0 billion subsidy to help develop the technology.

With the election looming in less than a month, the energy industry is attempting to understand the impact of a change in government.  Although Biden’s policy ideas are far from concrete, it does appear that some federal lands won’t be available for lease.  There is a divide developing between the larger oil companies that are able to absorb the costs of new regulation and smaller firms that probably can’t.  There are some other potential effects.  President Trump did manage to bring some order to the oil markets by getting the Kingdom of Saudi Arabia (KSA) to stop oversupplying the oil market.  He also has gotten the Chinese to buy U.S. oil as part of the Phase I trade agreement, which has actually forced the KSA to give up market share in China, at least for now.  A Biden White House would probably not have gotten involved, leading to lower oil prices.  And, if Biden is able to bring the U.S. back into the JCPOA, Iranian oil would begin to flow again, putting OPEC+ in a very difficult spot.  In addition, environmental rules, such as those affecting endangered species, would likely see greater enforcement.

The pandemic, as we have been documenting, has had an adverse effect on the oil industry.  Rising oil company bankruptcies could lead to state governments being forced to absorb any environmental costs of abandoned wells.  So far, oil industry employment has not declined significantly; however, as the chart below shows, since 2000, oil prices have tended to lead employment by about a year and a half.  Thus, we would expect employment to fall rapidly next year into 2022. 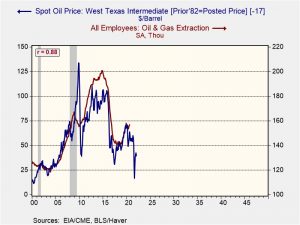