Commercial crude oil inventories fell 1.0 mb when a 2.0 mb build was expected.  The SPR declined 0.8 mb; since peaking at 656.1 mb in July, the SPR has drawn 16.5 mb.  Given levels in April, we expect that another 5.9 mb will be withdrawn as this oil was placed in the SPR for temporary storage.  Taking the SPR into account, storage fell 1.8 mb.

In the details, U.S. crude oil production fell 0.6 mbpd to 9.9 mbpd.  Exports rose 0.9 mbpd, while imports declined 0.2 mbpd.  Refining activity fell 2.2%.  Tropical activity affected the data again this week.  The hurricane season traditionally ends on Halloween and activity does appear to have slowed.  Hurricane Epsilon is in the mid-Atlantic but is not expected to affect the U.S. energy industry.  There are no other disturbances on the horizon for now.

The above chart shows the annual seasonal pattern for crude oil inventories.  This week’s data showed a small decline in crude oil stockpiles, which is contraseasonal.  Inventories tend to make their second seasonal peak about mid-November.  Tropical activity continues, which will affect the data for the next couple of weeks.  We are approaching the period where inventories tend to decline into year’s end. 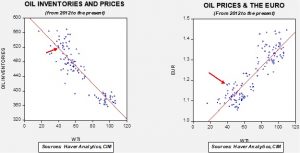 Distillate inventories have fallen sharply in recent weeks.  Consumption has been rising, although it remains below the five-year average.  The fall we are seeing in distillate inventories are consistent with seasonal patterns; if this pattern holds, the decline in inventories should begin to reverse by mid-November.

With the election looming, the issue of energy policy has become an area of interest.  The differences between the two parties’ populist wings are stark. The right-wing populists (RWP) want to drill and produce, arguing that climate change is a natural occurrence and something that can’t be affected by human action.  The left-wing populists (LWP) want to end fossil fuel production without a real plan on how to keep autos running or keep households cool in the summer and warm in the winter.  Between these polar positions lies the establishments of both parties; the right-wing establishment (RWE) mostly accepts some human effects of climate change and seeks market solutions to reducing carbon output—carbon taxes, cap and trade, etc.  The left-wing establishment (LWE) tends to lean more toward regulation but does worry about the economic impact of rapidly reducing fossil fuel output.

President Trump has adopted a RWP energy policy, reducing regulation and promoting production.  VP Biden’s energy policy is LWE; he views natural gas as a bridge fuel and may reduce federal leasing for fracking.  Weaving this issue is difficult for the political class because, on environmental issues, the public doesn’t give clear signals.  The way we view it is that the public supports environmental measures until the costs of those measures rise.  If President Trump wins, it’s a modest negative for oil prices but much more bearish for natural gas.  Under a second term, drilling and production activity will rise, weighing on prices.  Since natural gas is associated with oil production, the supplies of natural gas will likely rise faster than the market can absorb.  A Biden administration will be bullish for oil prices (but not necessarily for equities, as we noted last week) but likely much more supportive for natural gas prices.  This is because we would expect supply curtailments under a Democratic administration.

Meanwhile, as interest in alternative energy grows, one of the mysteries is why lithium prices are moribund.  It’s actually not much of a mystery; supply exceeds demand, even though the latter is rising.  Lithium isn’t all that rare in the world and there has been a good bit of anticipatory supply building on ideas that the rise in electric vehicle production will lift demand.  In some respects, this is good news for the alternatives industry; nothing would be dampening the expansion of the industry more than rapidly rising battery prices.  But, for investors, the disappointment surrounding lithium is a reminder that the balance of supply and demand matter.  We do note that Elon Musk announced he is getting into the lithium production industry.  Musk has been compared to Henry Ford, who also had a fondness for vertical integration.

Finally, Canada is investing in modular nuclear power research.  We hold that if carbon reduction is going to occur, expanding nuclear power will be hard to avoid.