Crude oil inventories fell when a build was expected.  Commercial stockpiles declined 2.0 mb compared to forecasts of a 2.0 mb rise.  The SPR declined 8.8 mb; since peaking at 656.1 mb in July, the SPR has drawn 12.8 mb.  Given levels in April, we expect that another 8.2 mb will be withdrawn as this oil was placed in the SPR for temporary storage.  Taking the SPR into account, storage fell 3.8 mb.

The above chart shows the annual seasonal pattern for crude oil inventories.  This week’s data showed a decline in crude oil stockpiles, which is contra-seasonal.  Inventories tend to make their second seasonal peak in the coming weeks.  Tropical activity has started to wane (it usually ends by Halloween), so the continued decline is bullish for oil prices.

Based on our oil inventory/price model, fair value is $42.90; using the euro/price model, fair value is $63.11.  The combined model, a broader analysis of the oil price, generates a fair value of $52.56.  The wide divergence continues between the EUR and oil inventory models.  As the trend in the dollar rolls over, it is bullish for crude oil.  Any supportive news on reducing the inventory overhang could be very bullish for crude oil.

Gasoline consumption continued to decline this week.  Seasonally, this is normal.  Driving tends to slow as vacation season ends.  As the chart shows, consumption declines slowly into mid-January.  This year may be different; if a vaccine is developed that increases commuting then we could see driving levels rise, but without that result we should expect overall demand to fall through Q4. 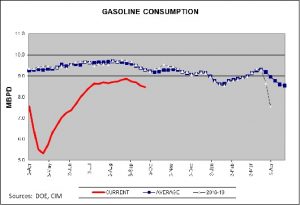 Kuwait’s emir, Sheikh Sabah al-Ahmad al-Jaber al-Sabah, died this week at 91 years old.  He was the ruler of Kuwait when Saddam Hussein invaded in 1990.  After that event, Kuwait became a close ally of the U.S.  He will be succeeded by his half-brother, Crown Prince Sheikh Nawaf al-Ahmad al-Jaber al-Sabah; however, the incoming emir is advanced in age (83 years old) and in poor health.  There is a potential leadership conflict that may develop once he dies or becomes incapacitated.  The emir opposed normalizing relations with Israel, but with his passing there would be a higher likelihood of Kuwait joining the UAE and of Bahrain recognizing Israel.

Saudi Arabia claims it dismantled a terror cell that had ties to the Islamic Revolutionary Guard Corps.  Iran remains a threat to the Arab states in the region.

Last week, we discussed the growing fear that oil demand has peaked.  Demand concerns have kept prices in a tight range, offsetting the bullish impact of dollar weakness.  California’s new ban to prevent the sale of internal combustion engine cars by 2035 is further evidence that peak demand may be, at best, coming in the near future.  Russian oil companies are criticizing the “green” direction of European oil companies, suggesting it is creating an “existential crisis” for oil supplies.  Perhaps another way of thinking about this issue is that it is creating an existential crisis for Russian oil companies.