In the details, U.S. crude oil production was steady at 12.0 mbpd.  Exports fell 0.1 mbpd, while imports fell 0.5 mbpd.  Refining activity rose 0.7% to 91.3% of capacity.  We are in the usual period for autumn refinery maintenance, so falling refining activity should be expected for the next few weeks. 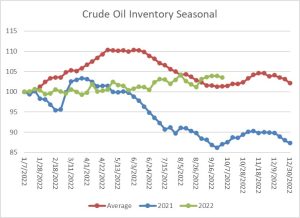