In the details, U.S. crude oil production was steady at 12.0 mbpd.  Exports rose 1.0 mbpd, while imports rose 0.3 mbpd.  Refining activity fell 1.8% to 88.9% of capacity.  We are approaching the end of refinery maintenance season, which means oil demand should begin to rise soon. 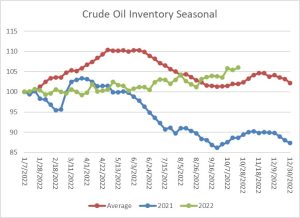 The Emergence of Zero: Since the onset of the war in Ukraine, Europe has been dealing with a natural gas crisis.  Between sanctions and Russia’s actions to reduce exports to the EU, natural gas prices have been on a tear.[1] 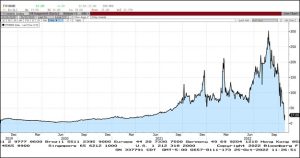 As the previous chart shows, natural gas prices from prompt delivery reached €300 per megawatt hour.[2]  However, a truism of markets is that prices engender a reaction.  Consumption has fallen and high prices have attracted LNG flows, leading to nearly full inventory levels.  With commodities, in general, but natural gas, in particular, once storage is maximized, there is really no place for the gas to go.  With liquid fuels, there is often some storage at the tertiary level.  With gasoline, for example, some can be stored in cars and at service stations, and this isn’t counted in national data.  With a gas, however, the ability to store is limited and because temperatures have been unusually mild in northern Europe, consumption for home heating has declined.  This week, prices actually went negative. 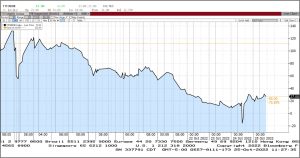 This situation is unlikely to last.  The current problem is that there is nowhere for the current flows of gas to go, but once temperatures fall, prompt supply plus inventory will be necessary. What must be remembered about natural gas inventory is that most facilities cannot store gas indefinitely as gas goes into the facility and out of the facility at roughly a steady rate.  In the U.S., storage injections usually end in November and then the gas must be moved into the market whether it is needed or not.  This is why the lowest natural gas futures prices have occurred in January.  If temperatures are warm, prompt supplies are combined with inventory disgorgement, leading to a collapse in prices.[3]

Obviously, this theory is highly controversial.  Anti-trust authorities are examining it, the passive industry suggests it doesn’t exist, and the pushback against ESG raises concerns about investment concentration.  What caught our attention is the notion that the common ownership problem may be contributing to the disconnect between commodity prices, in this case oil and gas, and the lack of a supply response.  In other words, we haven’t seen oil investment and production rise despite elevated oil and gas prices.  Although ESG has been blamed for this disconnect, the Dallas FRB survey suggests investor pressure was more important. 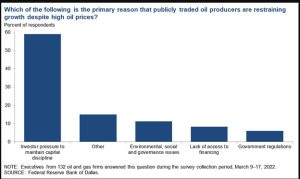 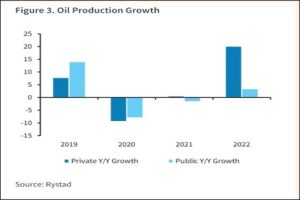 Currently, it is estimated that passive funds hold about 30% of the publicly traded universe of stocks.  That’s up from 10% in 2010.  In a sense, passive investment becomes a form of tacit collusion.  In a classic prisoner’s dilemma, both parties defect, leading them to longer prison sentences than if they both stayed quiet.  This outcome assumes a lack of coordination.  In economic terms, the decision matrix could be invest/don’t invest.  If both parties don’t invest, they receive higher profits, but if one company invests and the other doesn’t, the investing company is better off.  However, if both invest, production expands and prices fall, leading to a worse outcome for the businesses but a better outcome for society (greater supply, lower prices).  Last week, we reported on Harold Hamm’s quest to take Continental Resources (CLR, $73.67) private in order to free his company to boost production and release the firm from the clutches of the indexers.

President Biden is pressing the industry to boost output.  Maybe the solution is to address passive investing instead.

Policy: Last week, we discussed the situation with SPR policy and what appears to be the evolution toward using the reserve as a buffer stock.  Although the White House continues to argue that the releases are not politically motivated, it is hard not to observe that the releases are occurring before the midterm elections. 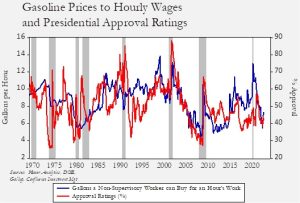 This chart overlays how many gallons of gasoline can be purchased at the current average U.S. gasoline price and the hourly wage for non-supervisory workers.  The higher the number, the better off the gasoline purchaser’s position.  Since 1996, when the gallon per hour measure is less than eight, the presidential approval rating averages 42.8%, while measures higher than eight average a 54.7% approval rating.  Lower gasoline prices don’t always help approval ratings (they didn’t do much for President Trump), but it is pretty obvious that they are having an impact now.

The SPR has seen the steepest decline in its history.  We note media sources are suggesting that there is still plenty within the reserve for emergencies.  That is only partially true as these comments ignore the fact that we have seen a larger decline in sour crude, which is preferred by U.S. refineries.  Although sweet crude is usable, it is more likely to be exported.  Thus, if the goal is the optimization of protecting Americans from a supply outage, it would make more sense to export sweet crude to lower global prices.  The fact that sour crude was drawn suggests that the primary goal is to lower gasoline prices.

As we have noted, the White House is promising to keep draining the reserve, but it is also promising to start buying crude oil in the $72 to $67 range.  We harbor serious doubts this buying will ever occur, as does the industry, but that promise is in the public record and could affect prices.

Finally, one of the overlooked elements of the SPR’s release was that cars don’t use crude oil; rather, they use gasoline (and a few use diesel).  Refining capacity has been constrained for some time, and industry officials told the energy secretary that recently shuttered refineries are unlikely to reopen.

[1] So much so that U.S. exports of fertilizer to the EU have soared, taking advantage of lower relative natural gas prices.

[3] There are some natural gas prices in the Permian that are approaching zero due to the lack of takeaway capacity.