[N.B. Today’s report was delayed one day due to the Columbus/Indigenous Day holiday.]

Prices have moved above $80 per barrel.

In the details, U.S. crude oil production fell 0.1 mbpd to 11.3 mbpd, remaining below the 11.5 mbpd pre-Ida level.  Exports rose 0.5 mbpd, while imports declined 0.2 mbpd.  Refining activity fell 2.0%.  We are in refinery maintenance season, which accounts for the usual seasonal build in crude oil inventories seen in the chart below.  This week’s draw is contraseasonal. 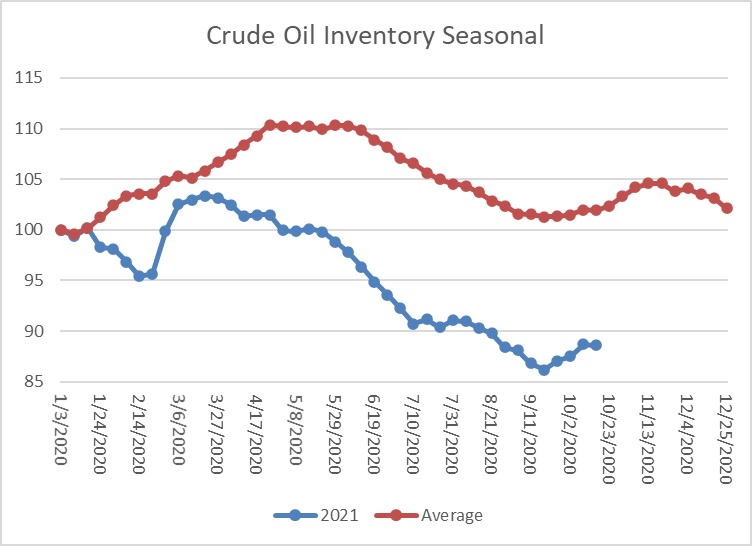 This chart shows the seasonal pattern for crude oil inventories.  We are in the autumn build season.  Note that stocks are significantly below the usual seasonal trough.  Our seasonal deficit is 68.8 mb.

Based on our oil inventory/price model, fair value is $65.70; using the euro/price model, fair value is $58.26.  The combined model, a broader analysis of the oil price, generates a fair value of $61.67.  We are seeing a notable divergence in the model between inventory and the dollar and a rising level of overvaluation.  Part of the overvaluation is likely due to fears of tighter inventories. If the builds continue, which is consistent with seasonal patterns, the model suggests some moderation of prices.  However, supply fears are so elevated this may not be the case. 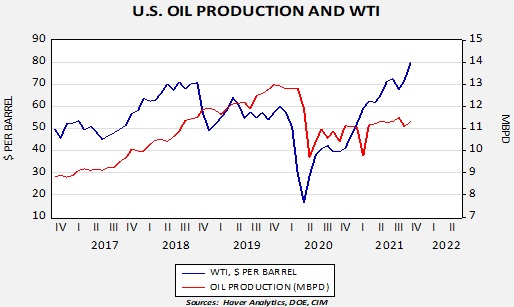 The relationship between oil production and prices varies over time, but in recent history, a $60 per barrel oil price generated 13.0 mbpd of production.  Nearly $80 now is only fostering production marginally over 11.0 mbpd.  To some extent, higher prices will speed the transition to alternative energy, but the pain it involves will not be popular.