In the details, U.S. crude oil production fell 0.1 mbpd to 11.9 mbpd.  Exports fell 1.7 mbpd, while imports rose 0.1 mbpd.  Refining activity fell 1.4% to 89.9% of capacity.  We are clearly in the period of autumn refinery maintenance, so falling refining activity should be expected for the next few weeks. 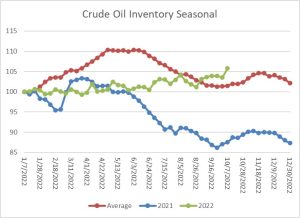 The SPR: As we discussed earlier, the SPR has become something of a buffer stock; thus, it makes sense when analyzing prices to consider U.S. inventories as the SPR and commercial stocks combined, as we do above.  Another element of the reserve is its composition.  Oil is broadly described as heavy or light (the measure of viscosity) and sweet or sour (the level of sulfur).  U.S. refineries have made investments over the years to favor sour crudes; the idea was that as fields aged, more oil would be of that variety.[1]  And so, when officials filled the SPR, sour crudes were favored, and until recently, the mix was 60/40 in favor of sour.  However, in the recent withdrawals, sour crudes were drawn much faster than sweet crudes.  Over the past year, 190 mb of crude oil has been pulled from the SPR: 156 mb have been sour, and 44 mb have been sweet.  At present, there are only 213 mb of sour crude remaining in the SPR, meaning its effectiveness to provide supply security has been compromised. 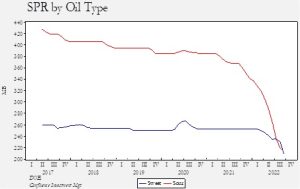 Unsavory Tradeoffs:  The OPEC+ decision to cut allocations by 2.0 mbpd has broad ramifications.  The cartel has argued that falling demand is behind the output decision.  This is what we see so far: 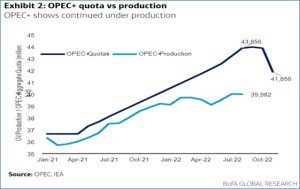 The bottom line is that the commodity business can require compromises.  At times, governments can decide that they will bear the cost of higher commodity prices because a producer is so far beyond the pale that cooperation is impossible.  For example, the U.S. has avoided buying Iranian oil since 1979, but in other cases, governments will turn a “blind eye” to such behavior to secure resources.  The Ukraine War has exacerbated these difficult decisions.  The EU delayed applying embargos on Russian oil and gas until early 2023, for example.  We expect more difficult issues to develop in the future. 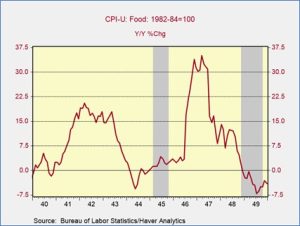 [1] This decision turned out to be a mistake.  Crude oil from fracking turned out to be sweet, meaning that it wasn’t ideal for U.S. refiners.  Thus, sweet crude is usually exported, forcing the U.S. to import sour crudes.  In broad terms, this means the U.S. is oil independent, but in practical terms, it’s not, due to the sweet/sour imbalance.