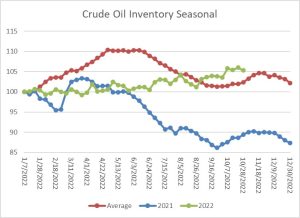 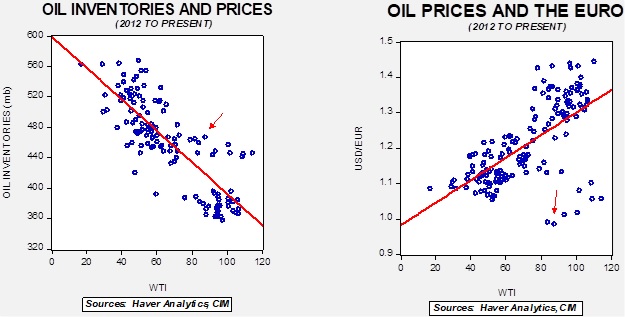 A prominent news personality recently suggested that “the country will run out of diesel fuel by Thanksgiving,” leading to a steady stream of questions to our inbox.  So, here is our take…

Diesel is part of a family of fuels called “distillates.”  Other members of this family include heating oil (diesel with a higher sulfur content) and sometimes jet fuel.  In general, diesel for road use has a lower sulfur content (it’s cleaner, in other words) so other distillates can’t easily be substituted for the diesel.  In the weekly data, diesel demand isn’t broken out from overall distillate demand.  To create a standardized measure of inventory (a mere level won’t tell you how much you have relative to demand), we divide stockpiles into daily demand.  By dividing inventory into consumption, we determine how many days of supply are available given current demand.  We are hearing that there are 21 days of inventory available, but since we can’t confirm diesel demand separate from distillate demand, we can’t confirm that number, although we can say that distillate stocks are tight, around 27 days. 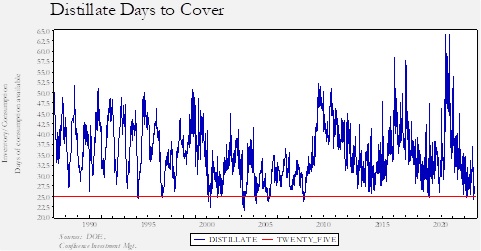 The above chart, which is weekly data going back to 1987, measures current distillate inventories compared to consumption.  As the chart shows, levels are around 25 days, which is “tight.”  On average, the “days to cover” is 35 days with a standard deviation of six days.  So, the current level of 27 days is in the “bucket” of two standard deviations below average.  At the same time, it is important to remember that this number tells us how many days we can go if our only source of distillate is inventory.  That would assume the U.S. refining industry would close, and we couldn’t import any fuel.  That isn’t the case.  It is strictly true that we could run out of distillate by Thanksgiving, but only if we closed the ports and stopped refining completely, which isn’t likely.  Simply put, conditions are tight but not dire.

Complicating matters is that Europeans are importing diesel as a backup fuel for electricity generation and heating, both at the utility level as well as the firm and household level. 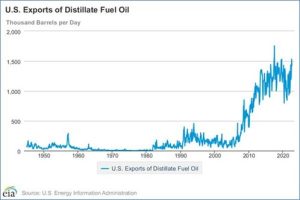 This is why the administration has floated export controls to ensure domestic supplies.  The problem is that it will be hard to keep the EU supporting the war in Ukraine if Europeans are freezing because the U.S. won’t send diesel.  At the same time, it will be hard to maintain support for the war in the U.S. if tight diesel supplies lift overall inflation.  In the past, when diesel fuel stocks tightened, our exports were much smaller.  So, the export situation has complicated matters.

There is yet another complication.  The Northeast (PADD1) is facing a severe shortage of diesel.  This region uses both natural gas and heating oil for home heating (the rest of the country mostly uses natural gas or propane) and so tight supplies can be a real problem.  Due to the Jones Act, this region usually imports distillate from abroad because it is cheaper to use foreign shipping than higher cost U.S. shippers, who are protected by the act.  But currently, Europe is absorbing the global supplies that would normally end up on the Eastern Seaboard.  It is unclear how this situation will be resolved, but the overall tight distillate market is being exacerbated by the shipping situation to the Northeast.

We don’t expect that the trucking industry will “shut down” due to the lack of diesel; instead, diesel prices will likely rise, which will cause adjustments (more rail traffic, for example, as trains are much more efficient) and delays in shipping.  However, the situation isn’t good.  About the only silver lining is that for every barrel of crude oil refined, roughly a third is distillates and 55% to 60% is gasoline.  As refiners lift production to meet diesel demand, we will get more gasoline in the market.

We also note that a weaker economy will reduce energy demand.  Already, U.S. trucking firms are reporting that shipments are down and we note that European economies are slumping as well.

Natural gas prices have been weak lately as the storage injection season is near its end, the tropical storm season spared the oil sensitive regions of the Gulf of Mexico, and so far, temperatures have been mild.  For the most part, the trends in supply and demand are balanced. 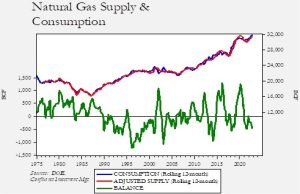 On a rolling 12-month basis, there is a modest level of excess demand.  Meanwhile, inventories appear to be in balance. 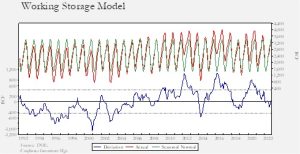 With supply and demand nearly in balance and inventories in line with seasonal norms, the direction of prices going forward will mostly be a function of temperature.  The official NOAA forecast suggests that most of the nation’s major population centers will be normal to warmer-than-normal this winter. 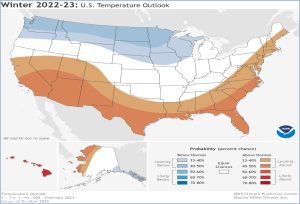 Of course, even in an otherwise mild winter, a cold snap can have important effects on demand and natural gas prices.  Overall, though, the forecast does offer hope that home heating costs will be manageable. 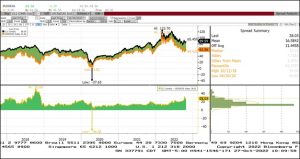