After touching $85 per barrel, oil prices have dropped on rising inventories and worries about tightening monetary policy.

In the details, U.S. crude oil production rose 0.2 mbpd to 11.5 mbpd; production has returned to the pre-Ida level.  Exports rose 0.1 mbpd, while imports fell 0.1 mbpd.  Refining activity rose 1.2%, suggesting we are at the end of the refinery maintenance season.  This build season usually ends in mid-November. 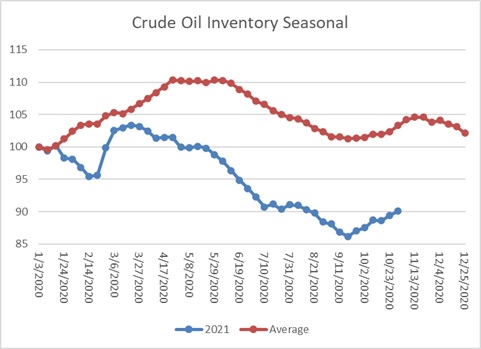 This chart shows the seasonal pattern for crude oil inventories.  We are in the autumn build season.  Note that stocks are significantly below the usual seasonal trough.  Our seasonal deficit is 68.4 mb.

Based on our oil inventory/price model, fair value is $63.30; using the euro/price model, fair value is $58.57.  The combined model, a broader analysis of the oil price, generates a fair value of $60.49.  Across all models, the current price of oil is overvalued.  Although supply concerns, especially the lack of response from producers in the light of high prices, is a bullish factor, it is also arguable that prices have mostly discounted (or perhaps more than discounted) the impact of this issue.  If so, we may see a period of consolidation in the coming weeks.

Another factor has been the decline in the SPR.  Since July 2020, inventory in the SPR has declined 43.6 mb, or about 2.9 mb per month.  As the chart below shows, the withdrawal from the SPR has not been a straight line, but if the SPR had not been reduced, current inventories would be below 410 mb, a level that would be consistent with current prices. 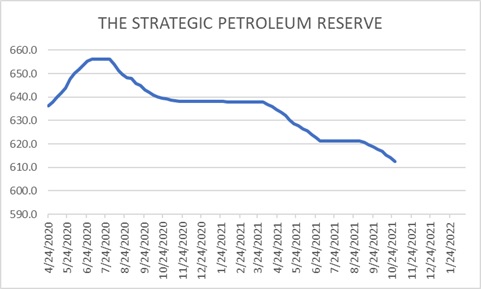 The Consolidated Appropriations Act of 2018 mandated 10 mb of sales from the SPR in 2020 and 2021 as part of a 58 mb sales over eight fiscal years beginning in 2018.  Since August, we have seen about 10 mb of sales, which means we may be getting near the end of sales for this year.