Here is an updated crude oil price chart.  The oil market is showing signs of recovery.

In the details, U.S. crude oil production fell 0.2 mbpd to 11.9 mbpd.  Exports rose 0.4 mbpd, while imports rose 0.2 mbpd.  Refining activity rose 0.9%, a bit more than the 0.8% rise forecast.  The inventory build was mostly due to continued elevated U.S. production, although the pace of the rise is starting to slow.

The above chart shows the annual seasonal pattern for crude oil inventories.  The last six weeks have pushed stockpiles almost “off the charts,” although there is evidence to suggest the pace of inventory injections is starting to peak.

Based on our oil inventory/price model, fair value is $29.18; using the euro/price model, fair value is $44.58.  The combined model, a broader analysis of the oil price, generates a fair value of $36.58.  As we noted recently, the model output is less relevant as there is a non-linearity tied to the loss of storage capacity that cannot be fully captured with these models.  At the same time, if storage remains available, the models would suggest upside for oil prices.  We also note that the Eurozone could be roiled by German court decisions which could limit the flexibility of the ECB to support the Eurozone economy.  This outcome would be bearish for the euro and may weaken it further, which would be bearish for oil prices.

Although consumption remains depressed, gasoline data does show that a bottoming may be underway. 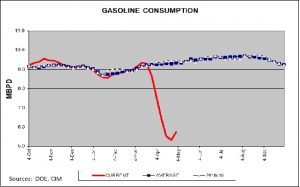 The weekly reporting is showing a steady decline in oil production.  Media reporting is confirming this trend as well.  The Fed has expanded its loan program to offer help to energy companies but there is little chance that it will be enough to protect smaller firms.  Longer term, there is growing concern among oil companies that oil demand may never return to pre-COVID-19 levels.  If that is the case, it will have profound effects on the energy industry.  Between the slow recovery and climate change legislation, oil consumption may have already peaked.  If so, higher cost reserves may not be recoverable.  It isn’t just oil that is affected; coal is also affected because weak prices for oil and natural gas will further weaken demand for coal as well.

In international news, Iran’s OPEC governor suffered a severe brain hemorrhage.  It is unlikely he will return to his post, but we doubt this will change Iran’s oil policy.  Israeli sources suggest that Iran may be reducing its support for Syria.  Recent bombing attacks by the IDF have brought little response from Tehran.  Consequently, Israel has stepped up its attacks.  We suspect two events have led to Iran’s pullback.  The first is that the assassination of Qasem Soleimani has reduced Iran’s ability to manage the relationship with Hezbollah in Syria.  Soleimani was a strong leader and his death may have created a leadership vacuum outside of Iran.  Second, low oil prices and U.S. sanctions have damaged Iran’s economy to the point where it can no longer spend the funds necessary to maintain influence in Syria.  If this trend continues, Russia and Turkey will vie for domination of Damascus.  The Iraqi government has stopped payments to the Kurdistan Regional Government.  Between the loss of these funds and lower oil prices, the Kurdistan government is near collapse.  If it fails, we would not be surprised to see Turkey try to expand its influence.  Most of the Gulf Cooperation Council states peg their currencies.  This action brings stability and allows these nations, which often import nearly all their consumer goods, to maintain low prices.  However, the decline in oil prices has raised fears that devaluations may be in the offing.  If so, it could raise internal tensions in these countries.