Here is an updated crude oil price chart.  Prices have declined over $10 per barrel since peaking on March 8.  Worries about slowing European growth and a slower than expected recovery in refinery operations after the Texas freeze have weighed on prices.

Crude oil inventories rose 1.9 mb compared to the 1.2 mb expected.  There was no change in the SPR.  Refinery operations, as noted below, continue to recover.

Refinery operations continued to recover last week and are near pre-winter storm levels.  We would expect utilization to stabilize in the coming weeks. 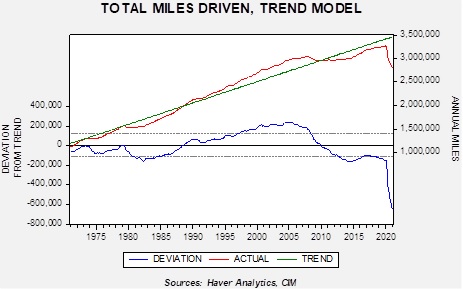 Driving activity fell below trend during the Great Financial Crisis and plummeted during the pandemic.  It is highly unlikely we will ever return to trend.  This factor will tend to dampen either gasoline prices or force the refining industry to contract.  Recent IEA research supports this notion.