In the details, U.S. crude oil production rose 0.1 mbpd to 13.1 mbpd.  Exports rose 1.0 mbpd, while imports rose 0.1 mbpd.  The inventory build was less than forecast due to the rise in exports.

The above chart shows the annual seasonal pattern for crude oil inventories.  This week’s report put inventory accumulation modestly above seasonal norms.  Inventories will be expected to rise steady into late May.  We will be watching this chart closely in the coming weeks for signs that inventories are rising abnormally due to the market share war described below.

Needless to say, our forecast for oil prices was reasonably accurate in terms of level but far too conservative in terms of time.  WTI has declined under $21 per barrel since our last report.  The combination of increased KSA supply and rising Russian output, combined with falling demand, is putting significant negative pressure on prices.  U.S. oil producers in the shale patch are already signaling layoffs.  The U.S. industry is more competitive and better hedged than in 2015; although bankruptcies are unavoidable, production will likely remain elevated for some time regardless of how low prices fall. 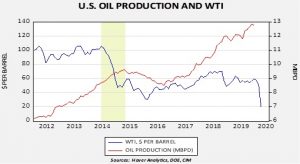 This chart shows WTI oil prices with U.S. crude oil production.[1]  We have highlighted the area from the peak in oil prices in 2014 to the peak in production in 2015.  The lag between these two periods was 10 months.  Thus, we would not expect any significant declines in U.S. output until late Q4 at the earliest.  If Russia and the KSA continue to fight for market share, oil prices will remain under further pressure for the foreseeable future.

[1] The official DOE data has a two- to three-month lag.  The production data reported in the weekly data is an estimate from the DOE.