Crude oil inventories fell 2.5 mb compared to a 0.5 mb draw forecast.  The SPR declined 4.2 mb, meaning the net draw was 6.7 mb.  The withdrawal from the SPR was near the surge maximum of 4.4 mbpd, which suggests the government is moving aggressively to lower oil prices. 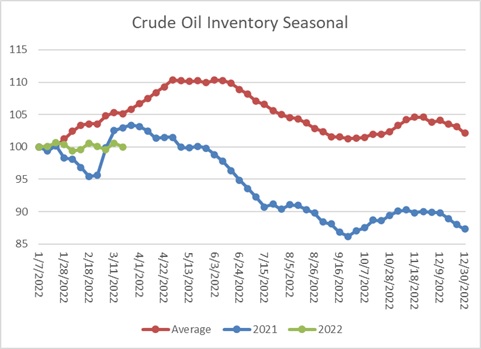 These charts make evident that the normal relationships between the dollar, inventory, and oil prices are currently broken.  However, the chart on the left indicates the degree of overvaluation has narrowed.  The first report after the war started is represented by the circle; we have seen prices move in (the average daily price during the month of March is used for this dot).  Overall, the market is consolidating after the major war spike.  We look for continued consolidation, although we note that the situation with Ukraine remains fluid, and prices could move strongly in either direction on war news. 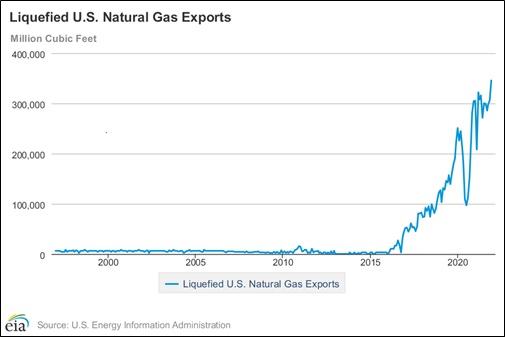 But not all of this gas will go to Europe unless pricing supports those flows.  Recent pricing has been supportive of flows going to Europe, but that may change if Asia also tries to lift inventories.  The U.S. has relaxed some trading rules recently that may help lift LNG exports to the EU.  But, there is one problem looming in this scenario; it appears we will have a “back-to-back” la Niña, which raises the chances for extended drought and a hotter-than-normal summer.  The last time this sort of event occurred was in 2012.  The summer of that year, for the region east of the Rockies, was quite hot.  July of that year was the second hottest on record in terms of population-weighted degree days, and June was the 12th hottest.  If the U.S. has a hot summer, it may not be possible for America to boost LNG supplies to Europe.