(NB:  Due to the upcoming Independence Day holiday, the next report will be published on July 9.) 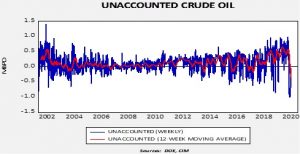 Unaccounted-for crude oil is a balancing item in the weekly energy balance sheet.  To make the data balance, this line item is a plug figure, but that doesn’t mean it doesn’t matter.  This week’s number is -53 kbpd.  This is a very small number and suggests the DOE is getting the data fixed.  The rise in production suggests that the unaccounted-for crude oil data was being affected more by crude oil stored in areas unreported, although falling output addressed some of this figure as well.

We have been seeing oil flow into the Strategic Petroleum Reserve (SPR) in recent weeks.  The government is offering storage in the SPR to relieve inventory constraints.  The chart below shows the history of the level of inventory in the SPR by party holding the White House. 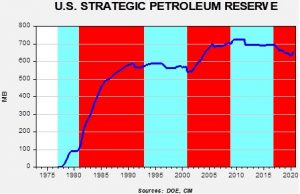 Although President Carter was an exception, in general, Republicans have tended to build the SPR, while Democrats have held it mostly steady.  This may be due, in part, to the fact that the GOP tends to favor the energy industry.  President Trump has not followed that pattern until recently.  We do expect these injections to be temporary as the rise is due to aiding the industry and not a deliberate policy to increase the stockpile.  But, since mid-April, 18.8 mb have gone into the SPR, easing bearish price pressures.

The above chart shows the annual seasonal pattern for crude oil inventories.  This week’s data showed another modest rise in crude oil stockpiles.  We are in the beginning of the seasonal draw for crude oil.  The continued rise in inventories is bearish for prices.

Still, the refining industry is continuing to struggle, and without improvement in this sector the demand for crude oil could stall in the coming weeks.