Crude oil inventories were mostly in line with market expectations, with stockpiles rising 1.2 mb compared to forecasts of a 0.8 mb draw.  The SPR added 1.7 mb this week.

In the details, U.S. crude oil production fell 0.6 mbpd to 10.5 mbpd.  Exports were unchanged, while imports fell 0.2 mbpd.  Refining activity rose 0.7%, in line with expectations.  As we have seen in recent weeks, the level of unaccounted-for crude oil remains elevated but did decline this week. 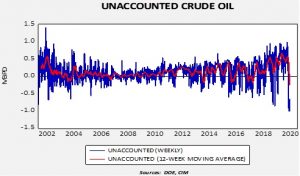 Unaccounted-for crude oil is a balancing item in the weekly energy balance sheet.  To make the data balance, this line item is a plug figure, but that doesn’t mean it doesn’t matter.  This week’s number is -0.7 mbpd.  The fact that the decline fell from 1.0 mbpd to 0.7 mbpd and coincided with a sharp drop in oil production suggests that this number is reflecting falling output.  Simply put, oil production is falling faster than the official data suggest.

The above chart shows the annual seasonal pattern for crude oil inventories.  This week’s data showed a modest rise in crude oil stockpiles.  We are on the cusp of the beginning of the seasonal draw for crude oil.  If inventories don’t decline in the coming weeks, oil prices would be vulnerable to a correction.

Although conditions in energy are improving, the recovery is slow.  Refining operations are 20 points below average.

The IEA forecast a sharp recovery in oil demand in 2021, which we would expect.  This year’s crude demand is expected to fall 8.1 mbpd but rise 5.7 mbpd next year.