In the details, U.S. crude oil production fell 0.1 mbpd to 11.1 mbpd.  Exports fell 0.4 mbpd, while imports rose 0.7 mbpd.  Refining activity rose 1.3%, above the 0.6% rise forecast.  As we have seen in recent weeks, the level of unaccounted-for crude oil remains elevated. 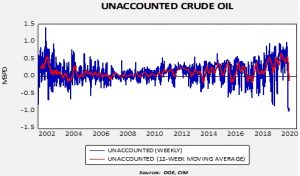 Unaccounted-for crude oil is a balancing item in the weekly energy balance sheet.  To make the data balance, this line item is a plug figure, but that doesn’t mean it doesn’t matter.  This week’s number is -0.9 mbpd.  For the fifth week in a row, this number is running nearly 1.0 mbpd.  The 12-week average has now gone negative for the first time since October 2017.  It may mean that in the scramble for finding storage, some oil is being inventoried outside the survey system.  This week, some 7.0 mb of crude oil went into storage somewhere, just not where it can be recorded.  Or, production is falling much faster than the DOE estimates are capturing so there aren’t any missing barrels; simply put, production is cratering.  The DOE did indicate it had made modest downward revisions to production, but we are increasingly leaning toward the idea that production is falling rapidly, much faster than the DOE is able to record.

The above chart shows the annual seasonal pattern for crude oil inventories.  This week’s data showed a rise in crude oil stockpiles.  We are getting close to the beginning of the seasonal draw for crude oil.  If inventories don’t decline in the coming weeks, oil prices would be vulnerable to a correction.

Although gasoline consumption is improving, the distillate market is becoming a worry. 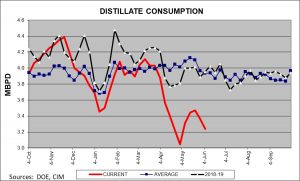 Distillates are the fuels of commerce; trucks, trains, planes and ships run on this fuel.  The weakness in consumption suggests that wholesale activity is probably slumping.  Perhaps the restocking of inventory that occurred after the initial decline is waning and the subsequent pickup is soft.  But the weakness here will tend to keep refinery activity slow and may cap the recent recovery in oil prices.

Although there are anecdotal reports that shale production may be restarting, history shows that there is about a five-month lag between prices and drilling activity.  That would suggest production overall will likely remain depressed well into Q4. 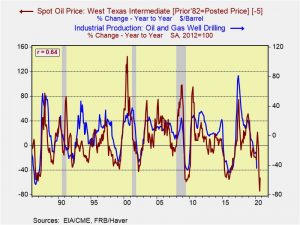 This chart shows oil and gas drilling activity from the industrial production data; in general, oil prices lead this measure by about five months.  If this pattern is maintained (and there is little reason to see why it won’t), we probably won’t see a recovery in drilling until much later this year, which is bullish for crude oil prices.

In politics and geopolitics this week, Iran has built a likeness of an aircraft carrier to allow its naval forces to train against.  Iran did something similar in 2015.  As U.S. forces leave Iraq, Islamic State activities are returning.  Although they are not in oil-producing areas, a return of IS would be bad news for Iraq.  We continue to monitor developments in Libya; currently, Khalifa Hifter’s forces have been reeling in the face of Islamic-leaning groups in western Libya who have been supported by Turkey.  We are seeing intermittent oil output disruptions.  China has been showing interest in increasing its influence in the Middle East.  Given China’s oil dependence, increasing its activity in the region makes sense, especially as the U.S. reduces its regional footprint.  However, we are surprised at Beijing’s increasing interest in Syria, which is a very small oil producer.  It will be interesting to see how Putin reacts to such behavior.  Although elements within the Democratic Party have pushed to severely restrict oil and gas drilling for environmental reasons, minority groups within the party are pushing for jobs in the sector.