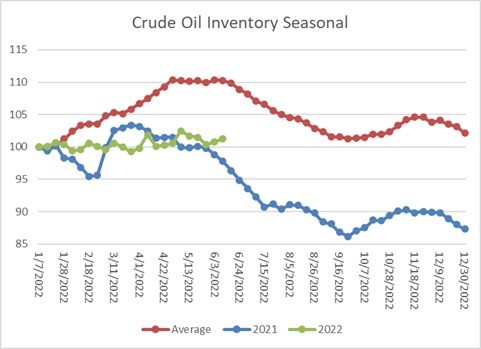 This chart shows the nearest contract for the Brent/Urals spread.  Before the war, Brent enjoyed roughly a $2 premium on Urals.  It is now around $35 per barrel and, so far, has shown little evidence of narrowing.  In general, if more buyers are able to purchase the cheaper Urals product, one would expect the price to rise, narrowing the spread.  Although we know India and China have been buyers of Russian oil, there still isn’t much evidence to suggest other buyers are participating.  In other words, we know sanctions are being violated, but for now, the degree of violation hasn’t been enough to bring lower oil prices.

[1] The initial costs are high, but the marginal costs are low, meaning that once built, the throughput is cheap.