After rising above $76 per barrel on news of the OPEC+ impasse (see below) prices have corrected modestly.

Crude oil inventories fell 6.9 mb compared to the 4.0 mb draw expected.  The SPR fell 1.2 mb, meaning without the addition from the reserve, commercial inventories would have declined 8.0 mb.  We note the SPR is at its lowest level since October 2003. 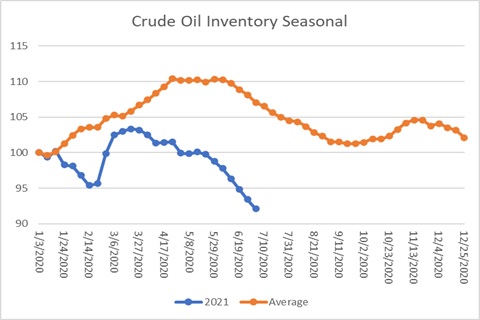 This chart shows the seasonal pattern for crude oil inventories.  We are well into the summer withdrawal season.  Note that stocks are already below the usual seasonal trough seen in early September.  A normal seasonal decline would result in inventories around 553 mb.  Our seasonal deficit is 77.1 mb.  At present, inventories are falling faster than normal.

Rising gasoline prices can be a political problem for the White House.  However, the key isn’t just the rise in prices but the relationships to income.  Clearly, consumers prefer lower prices to higher prices, but the combination of high prices and low wage growth creates a much more serious problem.  One way we try to measure this relationship is to divide the current wage for non-supervisory workers into the national average gasoline prices.  This calculation measures how many gallons of gasoline an average worker can purchase from working one hour. 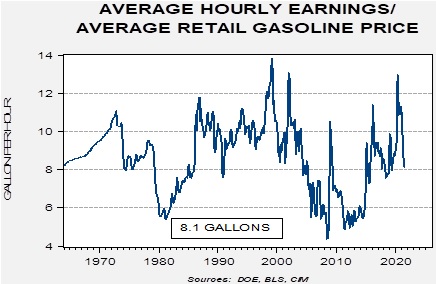 Currently, a worker can buy just over eight gallons at the average hourly wage.  The average since the mid-1960s is 8.6 gallons, so the current level is probably not enough to cause political turmoil.