High negative readings for unaccounted-for crude oil continues, although it is higher than what we saw a few weeks ago. 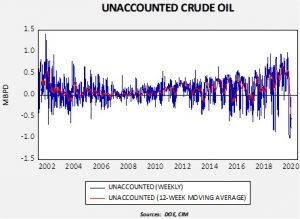 Unaccounted-for crude oil is a balancing item in the weekly energy balance sheet.  To make the data balance, this line item is a plug figure, but that doesn’t mean it doesn’t matter.  This week’s number is -765 kbpd.  This is a large number and suggests the DOE is still struggling to figure out what accounts for the missing barrels.  We suspect much of it is caused by the DOE overestimating production.

The above chart shows the annual seasonal pattern for crude oil inventories.  This week’s data showed a rise in crude oil stockpiles.  We are well into the seasonal draw for crude oil.  The continued rise in inventories is bearish for prices. 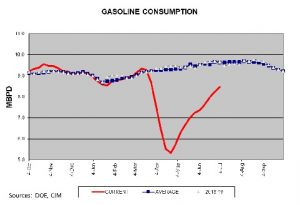 As the first chart shows, oil prices have recovered rather nicely from the epic collapse in April.  However, as prices have firmed, trouble is brewing within OPEC.  Saudi Arabia is threatening another market share war if smaller OPEC producers fail to meet the production reduction pledges.  Will Riyadh follow through?  We doubt it because it would disrupt U.S./Saudi relations.  At the same time, the Saudis would probably prefer to keep prices lower for longer to crush higher-cost producers and gain market share.  They just can’t figure out how to do that and maintain good relations with Washington (as an aside: the KSA may have an incentive to renew the market share war with a Biden presidency as it is less likely the Biden administration would ride to the rescue of the U.S. oil industry).

Democrats are proposing climate change policies that would bring zero emissions by 2050 and electric-only cars by 2035.  We see little chance this actually becomes law as whoever is in the White House will be wrestling with high unemployment instead.

China has been absorbing crude oil at a fast pace, taking advantage of low prices.  However, this source of demand may be waning in light of reports that China’s oil storage is nearing capacity.  This storage issue is colliding with China’s pledges to buy U.S. energy as part of the Phase One trade deal.  It is becoming increasingly unlikely that China will meet its pledge.

Natural gas prices continue to languish despite summertime temperatures in much of the U.S.  It’s not just domestic demand that is a problem; global consumption of LNG is down as well.