Crude oil inventories unexpectedly fell, declining 10.6 mb compared to forecasts of a 1.0 mb rise.  The SPR was unchanged this week.

In the details, U.S. crude oil production was steady at 11.1 mbpd.  Exports rose 0.2 mbpd, while imports fell 0.8 mbpd.  Refining activity rose 1.6%, well above expectations.  The drop in imports may have been affected by tropical storm activity; if so, we should see a rebound next week. 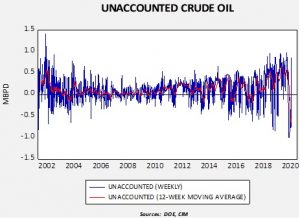 Unaccounted-for crude oil is a balancing item in the weekly energy balance sheet.  To make the data balance, this line item is a plug figure, but that doesn’t mean it doesn’t matter.  This week’s number is +43 kbpd.  Although this is one week’s report, stabilization would suggest the DOE is getting a better handle on production and inventory.

The above chart shows the annual seasonal pattern for crude oil inventories.  This week’s data showed a decline in crude oil stockpiles.  We are well into the seasonal draw for crude oil.  By this time of the summer, we have usually seen a 5% decline in commercial storage.  The fact that inventories are mostly steady is a bearish factor.

Based on our oil inventory/price model, fair value is $31.95; using the euro/price model, fair value is $56.08.  The combined model, a broader analysis of the oil price, generates a fair value of $44.17.  The wide divergence continues between the EUR and oil inventory models.  As the trend in the dollar rolls over, it is bullish for crude oil.  Any supportive news on reducing the inventory overhang could be very bullish for crude oil.

After a steady recovery since the trough in late April, gasoline consumption has stalled.  We suspect this is related to the surge in COVID-19 infections; if it continues, it is a bearish factor for crude oil prices. 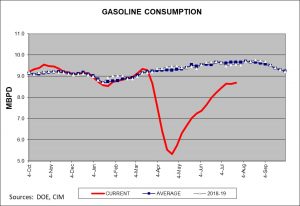 In energy news, U.S. oil companies are reporting a return of production as shale output returns.  Although it is unlikely that we will see a return to the peak levels of production for a while, the backlog of “drilled but uncompleted” wells offer ample opportunity for rising oil production.

Russia has been supporting Gen. Haftar in Libya.  A “private” mercenary group, based in Russia, known as the Wagner Group, has captured Libya’s largest oil field and the Es Sider export facility.  There are increasing concerns that Russia’s proxies are moving to take full control of Libya’s oil industry.  Libya is becoming a new point of friction between the U.S. and Russia.  The primary opposition to Russia’s aims in Libya is Turkey, which is supporting Islamist groups in the country.

VP Biden’s energy policy has led to concerns in the energy sector that he will support an aggressive “green” policy.  However, in his plans for climate, we note a call for increased funding for carbon capture.  A successful carbon capture regime would support both coal and natural gas.  Although a Biden presidency would not be considered friendly for the energy sector, it is also possible that the outcome may not be as dire as some might suspect (and also disappointing for left-wing populists).  We note that oil and gas groups have suggested there is “common ground” in the Biden energy plan.

Carbon credits, a European market that allows firms to trade carbon emissions, has become a significant bull market.  The rising price of credits is putting pressure on European coal.