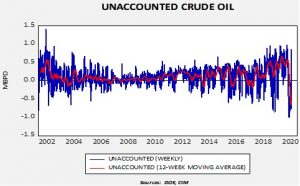 Unaccounted-for crude oil is a balancing item in the weekly energy balance sheet.  To make the data balance, this line item is a plug figure, but that doesn’t mean it doesn’t matter.  This week’s number is +857 kbpd.  This is a large number and suggests the DOE is still struggling to figure out what is going on in the domestic crude oil market.  The rise may be signaling that production is returning faster than the official figures indicate, but we will need to see more data to confirm that notion.

The above chart shows the annual seasonal pattern for crude oil inventories.  This week’s data showed a rise in crude oil stockpiles.  We are well into the seasonal draw for crude oil.  By this time of the summer, we have usually seen a 5% decline in commercial storage.  The fact that inventories are mostly steady is a bearish factor.

After a steady recovery since the trough in late April, gasoline consumption stalled this week.  We suspect this is related to the surge in COVID-19 infections; if it continues, it is a bearish factor for crude oil prices. 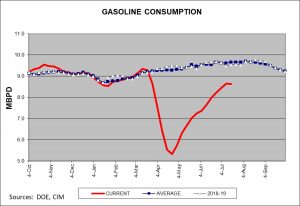 In geopolitics, we are seeing growing tensions in the Eastern Mediterranean between Turkey and Greece over natural gas deposits around Cyprus.  This dispute could involve multiple countries, including Egypt and Israel.  Complicating matters further is the current proxy war in Libya.