High negative readings continue for unaccounted-for crude oil, although they are higher than what we saw a few weeks ago. 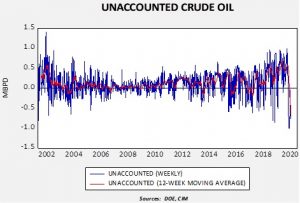 Unaccounted-for crude oil is a balancing item in the weekly energy balance sheet.  To make the data balance, this line item is a plug figure, but that doesn’t mean it doesn’t matter.  This week’s number is -768 kbpd.  This is a large number and suggests the DOE is still struggling to figure out what accounts for the missing barrels.  We suspect much of it is caused by the DOE overestimating production.

The above chart shows the annual seasonal pattern for crude oil inventories.  This week’s data showed a decline in crude oil stockpiles.  We are well into the seasonal draw for crude oil.  By this time of the summer, we have usually seen a 5% decline in commercial storage.  The fact that inventories are mostly steady is a bearish factor. 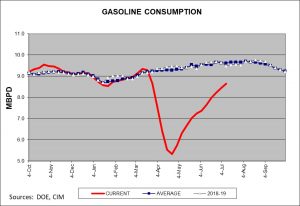 The oil and gas industry is facing a disinvestment movement from college and university endowments, driven by student activism.  In general, such movements tend to gain momentum when the cost of the action is low.  Current low oil prices make activism toward disinvestment relatively costless.  This action could become difficult to sustain if oil prices (and gasoline prices) rise in the future.

In light of last spring’s oil price collapse, the CFTC is getting involved in commodity ETPs.  The commodity regulator is pushing for greater disclosure of activity.  The ETPs were widely blamed for the negative prices for WTI (see the chart above) seen in April.

The recent rise in VAT in Saudi Arabia is calling into question the kingdom’s social contract.  For years, the House of Saud offered Saudi citizens a deal—the government would provide a deep safety net in return for not having a direct voice in how citizens are governed.  In essence, the Saudis created a rentier state that was funded from oil revenues.  In an attempt to diversify the economy in a period of low oil prices, CP Salman has moved to raise taxes to restore some of the lost revenue.  What remains to be seen is if common Saudis will tolerate “taxation without representation.”